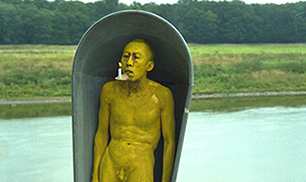 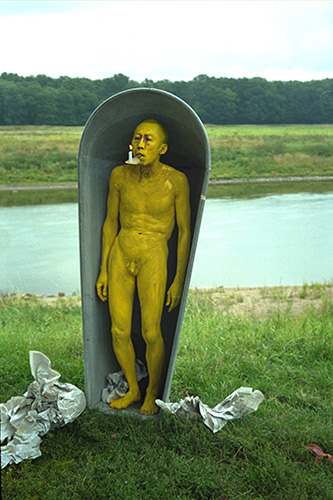 Best known for his Yellow Man series, Lee Wen is one of the pioneers of performance art in Singapore. Associated with the Artists Village, an important avant-garde artists’ group in Singapore since 1989, he later forged a distinguished individual practice as he gained international recognition. Performance art, Lee’s chosen mode of artistic expression, was subjected to a decade-long proscription beginning in 1994, the result of a controversial public performance by a local artist. The ban on funding of performance art made Lee firmer in his resolve to continue his practice despite the lack of sponsorship and grants and prompted him to work overseas for an extended period of time. The ban was finally lifted in 2004, but Lee continues to advocate for more openness both locally and internationally as the challenges still persist today.

“The Joseph Balestier Award honors artists who stand up for the fundamental right of freedom of speech in a difficult environment, and who blaze a path, not just for the next generation of artists, but for the broader society in Southeast Asia,” said Ambassador Wagar.

Three artists were shortlisted as finalists for the 2016 Joseph Balestier Award for the Freedom of Art by a jury comprising Professor Ute Meta Bauer, Director of Singapore’s Centre for Contemporary Art (CCA); Ms Luckana Kunavichayanont, Director, Bangkok Art and Culture Centre (BACC) and Mr Enin Supriyanto, an independent art curator and writer from Indonesia. In addition to Lee Wen (Singapore), the other two finalists are Aye Ko (Myanmar) and Nguyen Trinh Thi (Vietnam). Lee Wen has already been nominated for the second time.