ArtScience Museum dives into The Deep 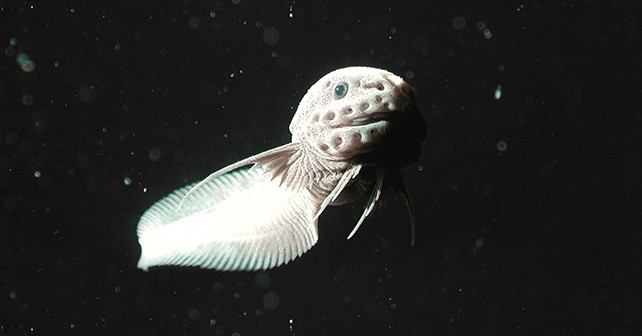 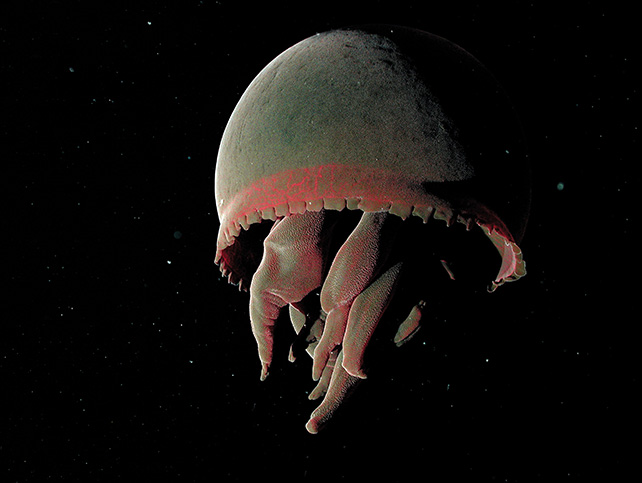 Tiburonia granrojo (The Big Red)
This large dark and velvety ball was discovered in 1993 by MBARI researchers in California. It is so different from other jellies that biologists had to create a new subfamily for it, called the Tiburoniinae, after the Tiburon, the robot that discovered them. To capture its prey, it does not use stinging tentacles, as do the majority of jellies. Rather, it deploys long fleshy arms whose number varies, curiously, between four and seven. Very little is currently known about this creature.
© 2002 MBARI

The mysterious world of the deep oceans will be illuminated this June at ArtScience Museum, as it presents the largest collection of over 40 deep sea creatures in the exhibition, The Deep. Opening on 6 June 2015, The Deep invites visitors to discover the beauty of the ocean life in an immersive environment.

The deep sea is the earth’s largest reservoir of life but has remained largely uncharted by man, with only 10 percent of the seafloor mapped so far. In fact, more men have walked on the moon than have dived down to the deepest part of the oceans. This exhibition will help to reveal the mysteries lurking in the deep through the display of perfectly preserved and extremely rare animals in crystalline detail. Odd and mesmeric, these breathtaking specimens will be accompanied by 67 images of captivating sea fauna and ethereal bioluminescent creatures, some photographed for the very first time. The images selected for the exhibition attest not only to the diversity of ocean life below 4,000 metres, but also to the technically demanding challenge of conducting research at these depths.

In 2001, then wildlife and scientific film director Claire Nouvian watched a film with spectacular images of sea creatures that live up to 4,000 metres beneath the surface. Fascinated by this new world, Claire collaborated with some of the world’s most respected researchers to create an extensive and unprecedented archive of abyssal images and specimens, many of which had never been seen by the public. The works led her to create the book, The Deep, the first visual encyclopedia of the abyss, as well as this exhibition, which premiered at Paris’ Natural History Museum in 2007.

At ArtScience Museum, The Deep will be presented in a unique, pitch-black environment, virtually immersing visitors into the realm of the deep sea. Organized into eight zones, the exhibition unfolds to reveal the different depths of the sea, such as life in the mid-water (up to 4000 metres beyond the surface) and life on the ocean floor. The final zone will be dedicated to Nouvian and her efforts to raise public awareness of the urgency to protect and preserve the fragile ecosystem of the deep sea. 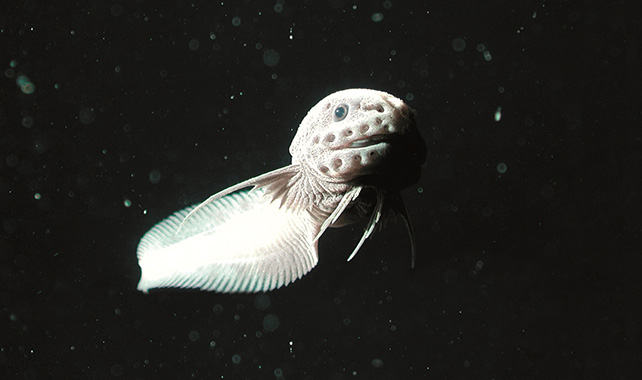 Careproctus longifilis
Threadfin snailfish
Size: 15 cm, Depth: 1900 to 2997m
Like a prehistoric tadpole popping suddenly before the ROV camera, this fish with its face perforated of large sensory pores seems to confirm the deep sea’s myth as a haven for fossil creatures that have remained unchanged since the dawn of time. Despite its strange looks, the threadfin snailfish does not number among the oldest sentinels of our planet, as do the horseshoe crab and the coelacanth, whose fossil records date back more than 250 million years.
© 2002 MBARI