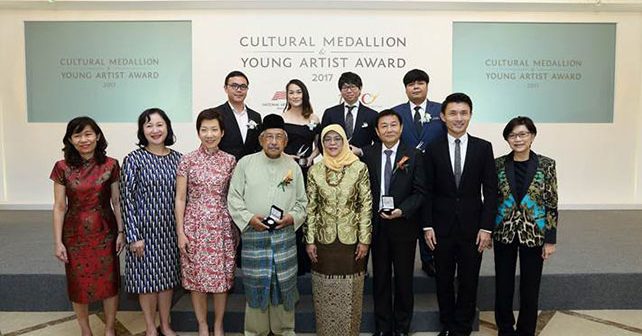 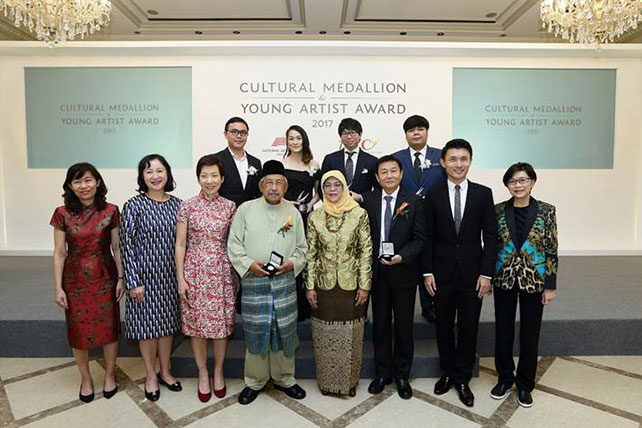 Six artists from various artistic disciplines have been conferred the Cultural Medallion and Young Artist Award. Administered by the National Arts Council (NAC), the awards recognise the recipients’ extraordinary contributions towards shaping a distinct, vibrant arts scene in Singapore, advancing their fields of arts practice and for bringing Singaporeans from different communities together through the arts. Each artist has also demonstrated a commitment towards educating, mentoring and inspiring the next generation of art makers; making a lasting impact through the numerous educational and community development efforts they actively promote and participate in.

Two distinguished veteran artists, who have demonstrated artistic excellence and professional maturity through an outstanding body of work, were conferred the Cultural Medallion.

Djamal Tukimin (b.1946) is an author, critic, playwright and researcher, with a career spanning 50 years. He is best known for his poetry in the Malay literary arts scene in Singapore and the wider Malay Archipelago. Active in promoting poetry and literature to the public, he has won awards for his contribution to the arts over the years, and was recently conferred the Archipelago Poet Award by the Prince of Songkhla University (Thailand) in 2015.

Law Wai Lun (b.1944) is a composer, educator and mentor, well-known for his versatility in his compositions and music arrangements which reflect artistry, thought and imagination. He is widely recognised for his contribution to the development of the ‘Nanyang Style’ in Chinese orchestral music. In addition to his extensive work with the Singapore Chinese Orchestra (SCO), he has also been commissioned to compose epic works presented at the Singapore Arts Festival, Huayi Festival and the National Day Parade. He has also won numerous awards, with the most recent being the Artistic Excellence Award 2017 by the Composers and Authors Society of Singapore (COMPASS).

The Young Artist Award was accorded to four artists aged 35 years and below, identified as having the potential to play a greater leadership role in Singapore’s artistic development.

Joshua Ip (b.1982) is an award-winning poet, editor and literary organiser. He has published four collections of poetry with Math Paper Press, most recently, footnotes on falling (2017); as well as co-edited seven anthologies, among them the ‘SingPoWriMo’ series (2014-2016). He co-founded the Singapore Poetry Writing Month in 2014, and founded Sing Lit Station in 2016, a literary non-profit organisation that seeks to develop Singapore’s writing scene. He has been featured at numerous home-grown and international literary festivals, and has organised workshop programmes for young poets.

Kahchun Wong (b.1986) is an orchestral conductor and composer. He has been featured multiple times by the Singapore Symphony Orchestra (SSO) and the Singapore Chinese Orchestra (SCO), where he was Conducting Assistant from 2011 to 2012. He is also the Founder and Artistic Director of Asian Contemporary Ensemble. Beyond Singapore, Kahchun has been a guest conductor of many internationally renowned orchestras across Asia and Europe. As a strong advocate of music education, Kahchun is the co-founder of Project Infinitude, a grassroots initiative committed to guiding and encouraging children from diverse backgrounds in their first musical steps. Kahchun was the winner of the 5th Gustav Mahler Conducting Competition held in 2016, and has recently been appointed as Chief Conductor of the Nuremberg Symphony Orchestra beginning from the 2018/2019 season.

Kray Chen (b.1987) is a multidisciplinary artist whose works are based on three main themes – Memory, Body and Inertia. Kray’s works are largely inspired by everyday life in Singapore, and are presented through video, film and interactive installations. His works have been exhibited at various platforms including Art Stage Singapore, Singapore International Film Festival and FRAC Des Pays De La Loire, France. A lecturer at LASALLE College of the Arts since 2013, Kray has also been involved in curatorial work. Kray was the Prudential Singapore Young Artist Finalist in 2014.

Yarra Ileto (b.1982) is a dancer and choreographer trained in modern dance and classical ballet. Through her past work with major dance companies in Singapore, including T.H.E Dance Company and The Arts Fission Company, Yarra has performed, led classes, created new works and facilitated outreach programmes for the elderly. Yarra is currently teaching at LASALLE and NUS Dance Synergy. As an independent artist, Yarra has choreographed works that have been showcased at different festivals and platforms.

“The Cultural Medallion and Young Artist Award recipients represent the pinnacle of Singapore’s artistic excellence and cultural creativity. As leaders in their fields who have contributed significantly to the rich tapestry of Singapore’s arts landscape, they inspire budding artists and Singapore audiences alike. We are proud to celebrate their achievements which will go a long way in profiling Singapore on the global arts stage.”

In recognition of the recipients’ artistic achievements and aspirations, all recipients will receive support for their future artistic pursuits and development, as they continue their efforts to advance Singapore’s arts and cultural landscape, as well as engage the wider community through their future projects. The Cultural Medallion Fund allows each respective recipient to access an amount of up to $80,000, in support of a single project or multiple projects over the recipient’s lifetime that meet the Fund’s objectives. The Young Artist Award Grant provides an amount of up to $20,000 to support each recipient of the Award in continuing their artistic pursuits and development – for example, through arts projects or studies that have a positive impact on the recipient’s artistic growth, or on Singapore’s arts scene.