Dance. Chance. Trance. In the Art by Kalpana Yuvarraaj 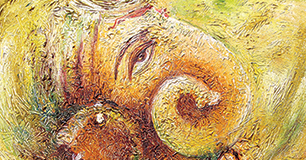 Dance. Chance. Trance. There is a reason why these words rhyme, in the case of a particular painting by Kalpana Yuvarraaj. 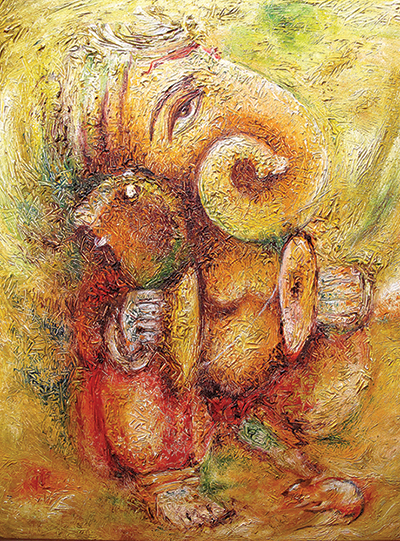 Dance. I have always been absolutely fascinated by the nattuvangam, which is indeed the process whereby a nattuvanar vocalises rhythmic syllables by striking cymbals (made of metal) that resonate specific patterns of beat that synchronise with the movements of the dancer during a Bharatanatyam dance recital (Bharatanatyam is a popular Indian classical dance form with ancient origins).  These patterns of beat from the striking of the cymbals are used as rhythmic cues for the dancer who is simultaneously aware of the pulse of the nattuvangam as he/she performs the magnificent art form to a captive audience. Chance. I have had the chance to lay my glance on Ganesha, an alluring acrylic-on-canvas by Kalpana Yuvarraaj, which so elegantly characterises Ganesha, the elephant-headed Hindu god, in the role of a nattuvanar; submerged into a state of immense concentration; oblivious to everything else but the rhythm of his cymbals pulsating into ether. One cannot help but applaud the artist for so prudently refraining from appointing Ganesha’s cymbals as the visual focus of the painting. Instead, the metaphorical portrayal of the kinetic energy of the aesthetic movement associated with nattuvangam takes centre-stage, through the dynamic rendition of zesty, ‘hyperactive’ strokes of texture.

Trance. Kalpana shares the motivation behind the conception of the painting, “I painted this in March 2013, during Natyanjali (an annual dance festival presented on a large scale at the Chidambaram Natarajar Temple in Tamil Nadu, South India). I thoroughly enjoyed the dance performances and it brought me into a trance. In this painting, my Ganesha is enjoying the cosmic dance and he is in a trance as he is in the process of nattuvangam.” As an extension to this statement by the artist, it is indeed intriguing to recognise that Ganesha’s gaze reflects a heightened state of blissful indulgence; a poignant moment of celestial intoxication. And of course, Mooshikan, the rat who is Ganesha’s mythological vehicle, is not forgotten, and is placed in a stance that guarantees salvation, at the feet of his master. The painting is exemplary in the sense that it carries the mellifluous transference of the trance of the artist to the trance of the subject in her painting. In turn, this feeling of a trance is so effectively felt by the on-looker.

Kalpana, an artist as well as a well-known entrepreneur, is currently pursuing a Doctorate in Social Entrepreneurship. She is a US State Alumni Post Graduate from the Madurai Kamaraj University (Tamil Nadu, South India). She was trained in the arts at Kothari Academy (1991) and the Julis Mcwan Institute (1994) and had further-trained with Kusum Debi (Princess of Bhuwaneshwar) and a number of Chinese artists in Singapore;  through several workshops in New York, London, New Delhi and Mumbai. Kalpana has participated in group and solo exhibitions  in Chennai, Mumbai, New Delhi, Singapore, Washington D.C. and Hong Kong. She is the proprietor of Kriya’s Dysn, a company that caters to private art collectors, corporations and public art spaces. Naturally, she has won prestigious awards in recognition of her work that combines creativity with sound entrepreneurship.
Let us continue to take the chance to dance in a joyful trance in the world of art that Kalpana invites us into. Dance. Chance. Trance.

Kalpana Yuvarraaj is an artist of ‘The Global Icon: Ganesha in Fine Art’, Gnani Arts’ blockbuster exhibition at ION Art Gallery (14 – 20 May 2014).
Visit www.gnaniarts.com or www.kriyasdysn.com