Del Karthyn Barton: the highway is a disco 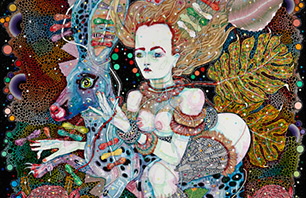 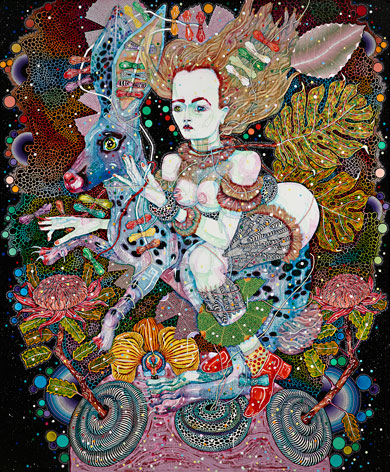 Best known for her highly detailed paintings filled with vibrantly adorned figurative imagery, Barton’s artistic strength and basis for creative exploration derives from her drawing talents. The precise, yet organic drawn line. Not dissimilar to the freehand simplicity displayed in the work of artists such as Egon Schiele or graphic Japanese animations, Barton boldly brings to life the outlines of female faces and bodies with architectural pens directly onto her canvases. Leaving no room for error or hesitation, each mark is intentional. The building blocks of her creations laid bare.

Barton’s meticulous ensuing processes involve, layer upon layer, the application of immaculate detail and technical dexterity via her signature acrylic and gouache finishes that offer a window into another realm. No part of the picture plane is left untouched. Countless confetti-like spots and dotting simulate the emittance of energy, presenting dense, populated compositions.

Barton’s visual lexicon invites viewers to explore the depths of a very particular, and at times alien, beauty. Disconcertingly intense, Barton’s uniquely elaborate and titillating scenes of cornucopia bring into focus inner worlds of feminine sexuality. A sustained tension between pleasure and unease, earthy delights and the fantastic are conveyed through bewildered looks of longing in the eyes of supernatural beings, contorted, elongated hands, and the combination of nudity with disarmingly girly adornment of ribbons, bows and bonnets. Here, childish innocence confronts transcendent libidinal states.

Such abundance continues in her pieces ‘wild carrot dream’, (2015), ‘the highway is a disco’, (2015) and ‘within my pleats’, (2015) whereby a menagerie of unclassifiable mystic creatures are juxtaposed by repetitive abstract patterning. Barton’s decorated version of euphoria engages in animist mythology directly in this new body of work.

Barton’s series of collages ‘inside another land’, (2015) apposes the female form with exotic flowers that appear like vulvas. Taking Hegel’s lead (in his Philosophy of Nature, Encyclopaedia of the Philosophical Sciences (1830)) orchids become anatomised. Florid orifices are conjoined with splayed legs and set against hallucinatory resonant patterns that recall Dadaist photomontages.

Her sculpture ‘with flowers’, (2015) pays homage to the history of women’s artmaking and the artistic practice of the late Louise Bourgeois. Made from bronze, this spider structure adorned with flowers is an ode to Bourgeouis’ towering sculpture ‘Maman’ (1999) that engages with the sphere of domestic nurture. The role of motherhood portrayed as at once beautiful and terrifying. The other sculpture in the show ‘to feel’, (2015) features a chaotic ball of disembodied baby arms reaching out in a variety of directions.

Perhaps the epitome of Barton’s quest to represent the ultimate act of love is in her film ‘The Nightingale and the Rose’, (2014). Evoking a beautiful sadness, Barton’s animated illustrations in the film bring to life the Irish playwright and poet Oscar Wilde’s eponymous dark fairy tale of unrequited love. The Nightingale and the Rose premiered at the Berlin International Film festival this year

Barton’s ‘the highway is a disco’ takes visitors on an imaginative journey that knows no bounds.

Barton produced the acclaimed film animation “Oscar Wilde’s The Nightingale and the Rose”–a haunting adaptation of Wilde’s short story about the price of love – that made its world premiere at the 2015 Berlin International Film Festival and was screened at the 2015 Melbourne International Film Festival. Her film received critical acclaim and was awarded the Film Victoria Erwin Rado Award for Best Australian Short Film.