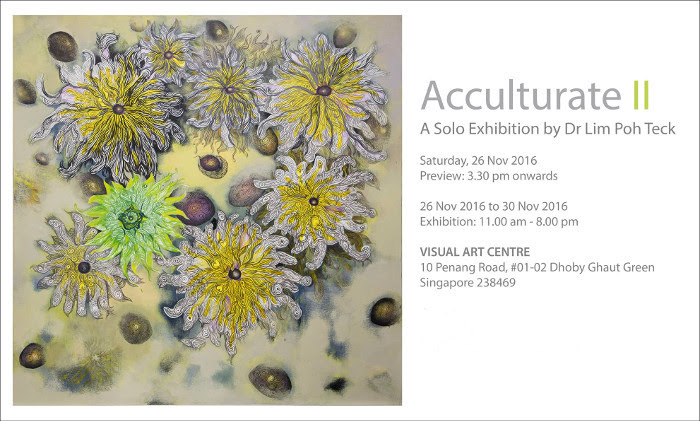 To acculturate is to assimilate into a different culture, to undergo cultural modification by adapting to or borrowing traits from others. Dr Lim Poh Teck’s oeuvre of East meets West art, describing his schizophrenic existence as an oriental artist in the global and thoroughly Westernized port of Singapore, manifests the tensions and culture wars that arise from necessary integration and occasional marginalization in an ostensibly migrant society.

In his paintings, traditional (Eastern) motifs may be presented in bold, colourful and graphic (Western) ways, juxtaposing unlikely elements in lively, contemporary combinations. Earlier paintings contrasted the kampong with the city, the vernacular with the urban public, relying heavily on floral and feline icons. Poh Teck’s most iconic floral or starburst motif has morphed from chrysanthemum to ceiling fan to radioactive symbol to fireworks. In its latest guise for this exhibition, they have acquired a certain three-dimensional rotundity as biomorphic object, appropriately green and ecologically-aware. Less universal but no less prevalent, cats or lions often crop up as main subjects in several compositions. Other times, subjects are subsumed to a complex background of ‘floral’ networks, as our eyes dance across a canvas which never fails to engage.