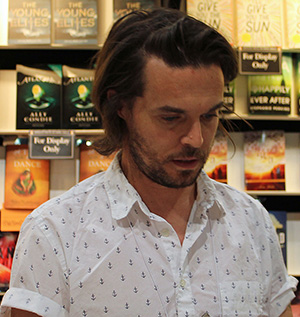 ACT 3 Drama Academy, recognised for its highly educational yet entertaining programmes for children, dedicates its March Holiday Workshops (14 to 24 March 2016, selected dates) to the magical works of best-selling author and illustrator Oliver Jeffers, in sync with the Academy’s commitment to adapting material and dramatic scripts from quality children’s literature.

Oliver Jeffers, an award-winning children’s author from Belfast, is well-known for both his art and writing. The child is invited into his unique world of mixed media, subtle narrative and use of space in composition. The workshops are designed with a focus on imagination, creativity and the desire to play. Younger ones from 2 to 7 years old will learn how to convey thoughts and emotions. There will also be a performance at the end of the workshops for 3 to 7 year olds for that added boost of confidence.

We Quit!
Inspired by The Day the Crayons Quit by Drew Daywalt and Oliver Jeffers
For 2 year olds, with parent
16 March 2016, 18 March 2016, 21 March 2016, 24 March 2016 (one-session workshop)
10.30am to 11.45am
$60 per child (with parent)
Bonding through drama is one of the key objectives of this workshop. Parent and child will explore the quirky world of a box of angry crayons and the endless creative and communication possibilities that result.

Let’s Catch a Star
Inspired by How to Catch a Star by Oliver Jeffers
For 3 to 4 year olds
14 to 18 March 2016 (five-session workshop)
9.30am to 11.30am or 3pm to 5pm
21 to 24 March 2016 (four-session workshop)
9:30am to 12:00pm
$300 per child
A heart-warming tale that will teach children about hope, perseverance and expecting the unexpected. The workshop aims to nurture a child’s imagination, sense of exploration and communication skills.

The Kite in the Tree
Inspired by Stuck by Oliver Jeffers
For 5 to 7 year olds
14 to 18 March 2016 (five-session workshop)
9.30am to 11.30am or 3pm to 5pm
21 to 24 March 2016 (four-session workshop)
9:30am to 12:00pm
$300 per child
The absurdly funny story of how to rescue a kite that is stuck in a tree has been transformed into a piece of dramatic work that will stimulate the children’s minds as they work together to release the kite by throwing everything at it!

Persuasive Speaking
For 8 to 10 year olds
14 March 2016, 16 March 2016, 18 March 2016 (one-session workshop)
2pm to 5pm
$90 per child
This session, based on original material, is all about the art of convincing through communicating and building up courage in the child as he or she learns an essential life skill.