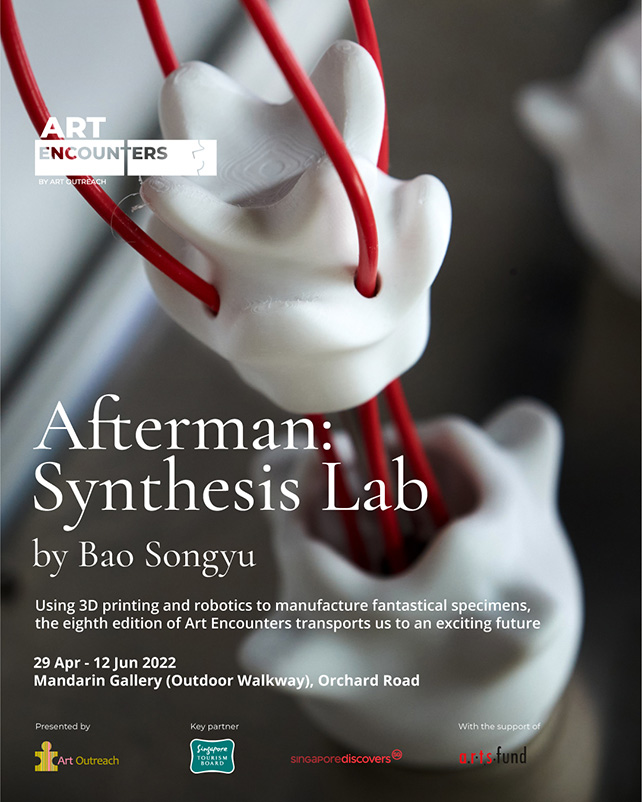 The much-anticipated Art Encounters by Art Outreach, a travelling exhibition series housed in repurposed shipping containers, will return to Orchard Road from 29 April to 12 June 2022.

In its eighth edition, Art Encounters will feature an interactive 3D-printed and robotics installation by local maker-designer Bao Songyu that anticipates an exciting future where genetic diversity abounds. Bao is known for his work in 3D printing and robotics, which he uses to explore social and environmental issues. His kinetic sculptures and installations, which have been featured in ArtScience Museum, HATCH Art Project and National Gallery Singapore, make use of the flexibility offered by 3D printing to explore issues of the future.

Transporting audiences to the year 2222, the first container in Afterman: Synthesis Lab will feature a series of speculative robots from the future, which have taken on composite adaptations and mutations drawn from various plant, animal and fungi specimens. Each sculpture’s traits were crowdsourced from previous audiences, then designed and constructed by Bao using 3D printing, and assembled on a motor to allow them to move realistically. This process of customisation is inspired by the power of CRISPR technology, a marvel that allows scientists to manipulate genes by targeting and editing parts of the genome. Challenging the conventional critique that customised gene editing lets humans play God, Afterman considers the potential of harnessing such technology to accelerate biodiversity, offering a solution to replenish what we have lost through environmental degradation and cure diseases.