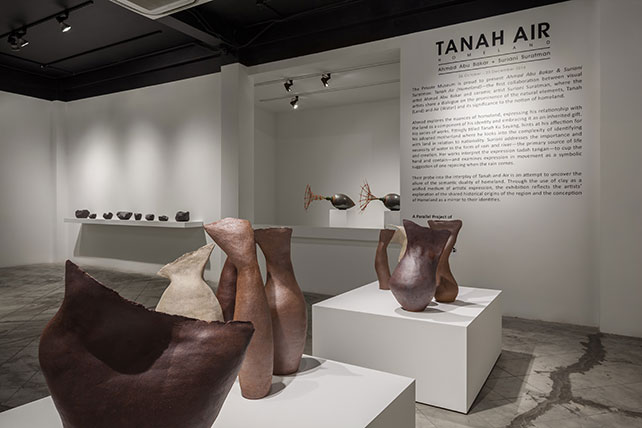 In conjunction with the Singapore Biennale 2016: An Atlas of Mirrors, The Private Museum presents Ahmad Abu Bakar & Suriani Suratman: Tanah Air (Homeland) — the first collaboration between visual artist Ahmad Abu Bakar and ceramic artist Suriani Suratman, in which they explore the theme of Tanah (Land) & Air (Water) and its significance to the notion of homeland.

Ahmad explores the nuances of homeland, expressing his relationship with the land as a component of his identity and embracing it as an inherited gift. His series of three distinct bodies of works, fittingly titled Tanah Ku Sayang, hints at his affection for his adopted motherland where he looks into the complexity of identifying with land in relation to nationality. Suriani addresses the importance and necessity of water in the form of rain and river — the primary source of life and creation. Her works interpret the expression tadah tangan — to cup the hand and contain — and examines expression in movement as a symbolic suggestion of one rejoicing when the rain comes.

By: The Private Museum