All We Do is Gloss Each Other 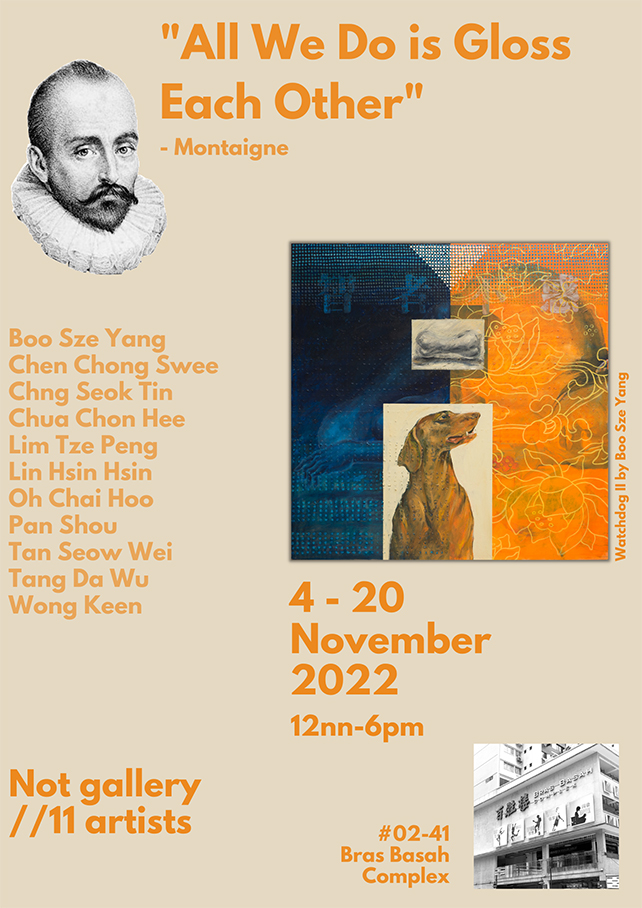 Ever since Western critics first laid their eyes on Chinese paintings, they have remarked on the unstable relationship between text and image. Indeed, as this exhibition shows, there is nothing self-evident about the distinction between calligraphy and paintings in the Chinese tradition—calligraphy is not simply the presentation of words, and neither can textuality be divorced from painting. Through a selection of Singaporean artworks that feature Chinese characters (whether calligraphed in the traditional sense or not), this exhibition hopes to explore the varied ways the presence of text was used by artists to texture their work.

In its most traditional form, calligraphy expresses a comfortable proficiency with characters and their content, often classical or self-composed poems (Pan Shou). It can similarly be ekphratic, demonstrating the artists’ depth of thought (Chen Chong Swee). When the content becomes overly familiar, however, the cultural capital of the inscriber quickly diminishes, and calligraphy becomes a pastiche. Though dismantled, calligraphy-as-kitsch may also prove constructive, whether as a vehicle to focus on the essence of form (Lim Tze Peng) or reconstituted fragments that reimagine the way we approach the written word (Chng Seok Tin).

Modernity in calligraphic practice often consists of a move away from content and towards form. Esoteric scripts such as the oracle bone (Lin Hsin Hsin) and cursive (Tang Da Wu) scripts result in deliberate illegibility, evoking within the viewer an oxymoronic tension, at once able to recognize the presence of characters but unable to read them. On the other side of the equation, easily read writings in simplified characters defy our expectations of Chinese calligraphy but renew the art form for a Singaporean audience (Chua Chon Hee*). Ekphrasis did not sink into an amicable death, however, as artists continued to use calligraphy to ground the meaning of their painted forms, though with a much greater blurring of lines (Tan Seow Wei).

In the Singaporean context, partly genealogically descended but also distinctly removed from the Chinese tradition, the presence of Chinese characters can also be ideological. Chinese characters in works produced in a foreign cultural field serves both as autobiography (Wong Keen*) or a declaration (Boo Sze Yang*). Expressed in non-ink media, simply the presence of calligraphy is sufficient to pull the black of oil-based paint to the tonalities of ink (Oh Chai Hoo*).

Eventually, as we sink deeper and deeper into the rabbit hole and consider what multitudes of meaning the presence of Chinese characters can mean, we find that it is in essence not about its inscribed content but referential in nature, whether of a revered tradition, a cultural milieu, a body of aesthetics, form, shape, content, symbol… as Montaigne pithily expressed: ‘all we do is gloss each other’.