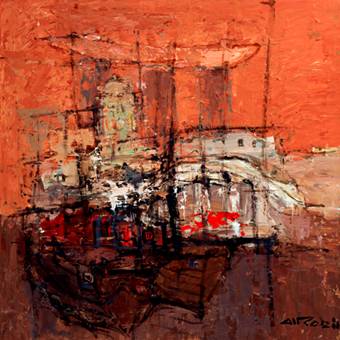 Reminiscing Landscapes features 20 works by acclaimed local artist, Ang Ah Tee. On showcase are scenes composed in the artist’s signature style including local landmarks like Chinatown and Marina Bay Sands, as well as the scenic landscapes of Bali, Sydney, Venice and Hydra.

Ang Ah Tee (b. 1943 – ) graduated from Nanyang Academy of Fine Arts in 1962 and specialises in watercolour, oil and acrylic painting. Since the 1990s, he has developed a distinct repertoire of acrylic landscape painting admired for its skilful gestural strokes and strong accents of colours. The acrylic medium allows Ang to paint in a swift, spontaneous mode that melds well with heavy palette knife sculpting, giving his paintings a rich ethereal quality. For his dedication to painting and contribution to the Singapore art scene, Ang was awarded the Cultural Medallion by the Singapore Government in 2009.

The landscape paintings on exhibit are dated from the mid-2000s to 2015, giving audience an insightful window into Ang Ah Tee’s thematic and technical exploration in the past decade as he matures stylistically as a painter.