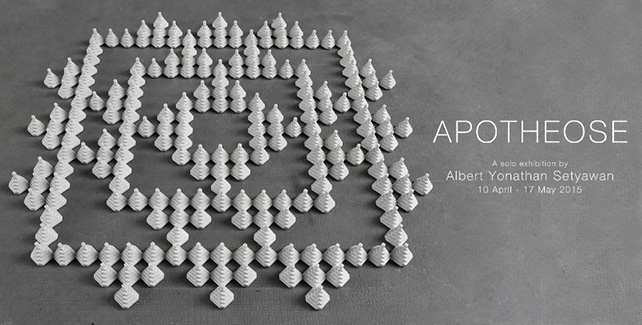 One of the strong characteristic of Albert Yonathan’s works is the geometrically or symmetrically well organized ceramic objects, which is repetitive in it’s own configuration because the all the parts came from the same object. Each part usually represents animal, plant, human or some architectural shapes that resemble a shrine or religious buildings. All of the objects were made in a simplified manner and relatively small in size. To configure all the ceramic objects he has created, Albert uses a very simple geometric pattern or shapes such as triangle, circle, square, hexagon or a diamond shape. Because of the strong repetitive and geometrical arrangements, Albert’s works somehow creates a deep religious or spiritual that is not resemble any particular religious practice but instead deals with cosmological ideas of human interconnection with nature and the universe.

In recent years Albert has created some installations that derived from a ‘mandala’ and ‘labyrinth’ structures. The pattern consisted of repetitive objects that closely resemble a stupa or a temple. Some of the installations were installed during the opening of the exhibition as a performance pieces.

The exhibition will be showing two of his new mandala installations and some other works including drawings and prints. He also invited one of his friends Tunyaporn Hongtong, a writer who lives and works in Bangkok, Thailand to write a short essay as a response to the main idea of the exhibition. The essay that will be presented later in the catalogue is not a curatorial writings but instead a form of free creative writing as a way to view the concept that Albert has been drawn into in his works in a different form.