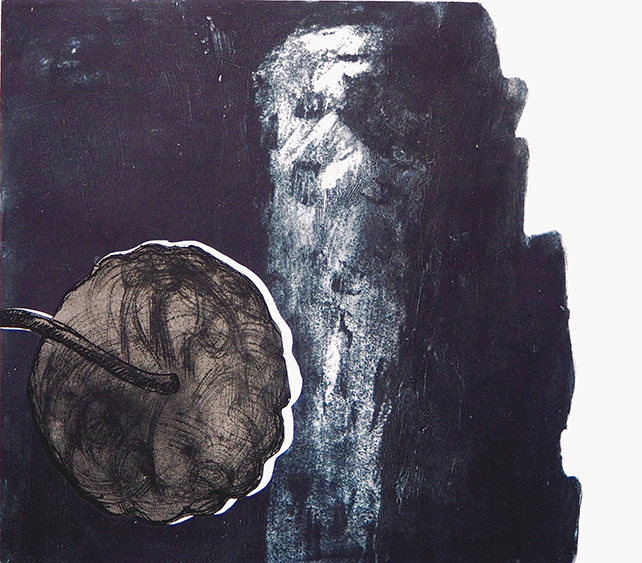 AC43 gallery proudly presents local printmaker April Ng’s latest solo exhibition Salient Traces. The showcase features about 20 original intaglio prints – each created and handpulled personally by the artist – and foregrounds April’s interest in forms inspired by nature and her continued investigation into the minute but palpable organic presence in our everyday environment.

For instance, the new group of prints titled Existential Silence dramatises the organic interdependence between living and non-living objects: a thriving strand of botanical life that has erupted from the crevice of a rock gently embraces the surface of its refuge like a subtle and dignified gesture. While it has survived nature, the necessity of its existence amounts to nothing of terrestrial concern and most likely goes unnoticed by the human eye. Yet April’s work also takes apart conventional notions of spatiality. A lifeless rock is perhaps more often understood as a compound of minerals incapable of sustaining life but its physical essence as ascribed by nature is in fact capable of supporting lifeform without being a basis for it, as observed in her work. The ambiguity and multiplicity of meanings that she purports through a seemingly stable and simplistic structure of form accentuates the poetic richness of her visuals.

Similarly utilising the robust dynamics of black as a colour but to different effect, another new group of larger monoprints titled Gentle Silent Breeze features juxtaposing dimensions of gradated blacks that fill up the entire expanse of the paper. Overflowing before our eyes are blacks built on blacks, or against blacks, yet there is an order amidst the flux that evokes the beauty of natural phenomena, such as the changing cloud formation in an evening sky or the uneven rhythmic flow of a spontaneous breeze.