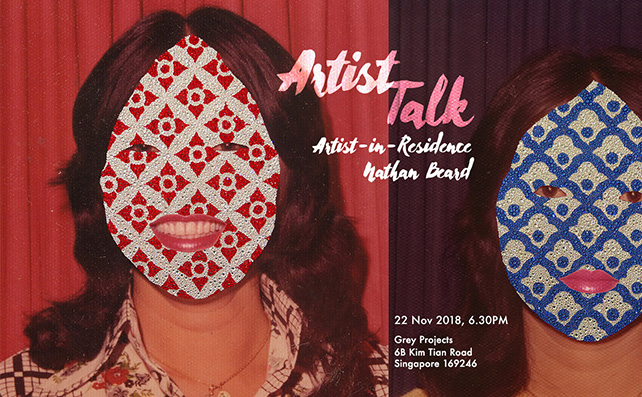 During his residency at Grey Projects, Nathan Beard has been conducting research that deepens the themes consistently found in his works, notably those related to his cultural heritage. His research in Singapore is focused on Chulalongkorn, a past King of Siam whose historical legacy is significant in that he is widely credited as having modernised Thailand, adopting key military and government reforms which allowed it to avoid Western colonialism. Chulalongkorn made official visits to Singapore in 1871 and 1890, marking the first international tours by a reigning Thai monarch. Nathan’s research has comprised of on-site visits to locations significant to these royal tours, as well as looking into books and archival material in various libraries related to Chulalongkorn’s reign. He has also been looking into museological displays of South-East Asian art, and particularly displays of Thai artefacts.

These processes have resulted in gathering visual material that will sustain an ongoing project, which also looks to incorporate visual textures from the 1951 film musical ‘The King and I’. Despite its popularity in Western media, the film remains banned in Thailand due to its historically inaccurate depictions of the Thai Royal family. The film is very loosely based on the interactions between Chulalongkorn’s father, King Mongkut, and Anna Leonowens, who was hired as an English teacher for his children. Anna Leonowens was from a mixed racial background and spent time in Perth, Western Australia before moving to Singapore, which was how she made the connections that inevitably led to her position in the Thai Royal Court. ‘The King and I’ remains a significant cultural artefact for Nathan in that it represents the first time he became aware of his mother’s culture as represented through the lens of Western popular culture. The research he has conducted looks to entangle speculative and fictionalised narrative threads inspired by the intersections of the historical, cultural, and personal information he has described.

During his talk, Nathan will be presenting a selection of key photographic and sculptural works from his practice in order to provide a contextual framework for the new body of work he has initiated during his residency, as well as showing highlights from the material he has collected.