ArtScience on Screen – Lo and Behold: Reveries of the Connected World 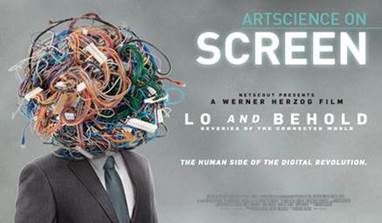 In Lo and Behold: Reveries of the Connected World, master filmmaker Werner Herzog tackles one of the most complex and troubling topics of our lifetimes, the internet. Featuring interviews with giants of the technology world, including Elon Musk, Lawrence Krauss, Kevin Mitnick, and J Michael Vanderweghe, the film keenly explores the ramifications of the internet age. With humor, wit and the infallible authority of Herzog’s narrative voice, audiences are led on a journey of personal and intimate testimonials touching on topics from the glories of connectivity, the dangers of hacking and Web addiction and the unchecked possibilities of artificial intelligence and robotics.

Werner Herzog, director of celebrated films including Aguirre, the Wrath of God (1972), Fitzcarraldo (1982), and Grizzly Man (2005) is one of the world’s most important filmmakers. In a glittering career spanning over four decades, Herzog is known for his extreme and unorthodox approach to filmmaking. In 2009, he was named one of the 100 most influential people on the planet by Time magazine.