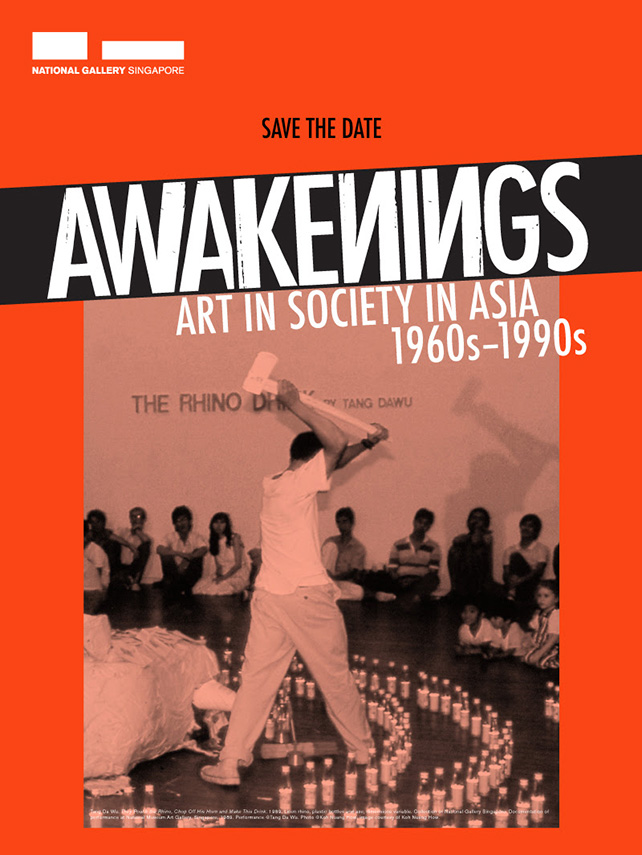 The period between the 1960s and 1990s was characterised by ideological confrontations, a rise in nationalism, rapid modernisation, and a wave of democratic movements across Asia. Significantly, it also gave birth to a multitude of experimental art practices as artists and the wider public were awakened to the emancipatory power of art to shape and assert their identities. Spotlighting this critical turning point is the latest exhibition at National Gallery Singapore, Awakenings: Art in Society in Asia 1960s-1990s, which will make its Southeast Asian premiere on 14 June 2019, following successful showings in Japan and Korea.

Featuring 142 provocative artworks by more than 100 artists from 12 countries in Asia, the exhibition is jointly co-organised by the Gallery, Museum of Modern Art Tokyo (MOMAT), Museum of Modern and Contemporary Art Korea (MMCA) and the Japan Foundation Asia Center. It chronicles one of the region’s most turbulent periods through a transnational artistic lens, with a focus on the radical qualities of experimental practices in Asia. Importantly, Awakenings outlines how artists questioned conventions and challenged those around them to assume new positions of criticality in society. Such social movements and concerns continue to be relevant today.

Audiences are invited to re-examine their understanding of Asia over the three decades, which collectively saw the re-evaluation of politics, society, economics and culture. And through this explorative journey of deep introspection, reflect upon the role that art continues to play, in serving as an expressive tool that brings important social issues to the fore.

Four years in the making, the exhibition draws on the expertise, collections and networks of the three institutions to illustrate this multi-layered history for the first time. It is structured in three sections – Questioning Structures, Artists and the City, and New Solidarities. Artists at that time found intersections between art and activism as they questioned invisible but dominant structures of power in society. They sought to express the struggles felt by the marginalised with the rise of rapid urbanisation and consumer capitalism. Art was relocated into everyday reality and public space to communicate these common ideas among the people. A new awareness of subjectivity and broad criticisms of Western modernism also led to the emergence of various aesthetic experiments and movements that looked to escape the modern concept of ‘art for art’s sake’ and to bridge the gap between art and everyday life. ‘Awakening’, in this case, thus refers to this heightened awareness towards politics, the emergence of new artistic attitudes, and a newfound belief that aesthetic voices could respond to the region’s own geopolitical contexts.

Awakenings: Art in Society in Asia 1960s-1990s is co-curated by Seng Yu Jin, Adele Tan, Charmaine Toh and Cheng Jia Yun from National Gallery Singapore, Suzuki Katsuo and Masuda Tomohiro from MOMAT, and Bae Myungji and Ryu Hanseung from MMCA. It will be on show at the Singtel Special Exhibition Gallery until 15 September 2019.