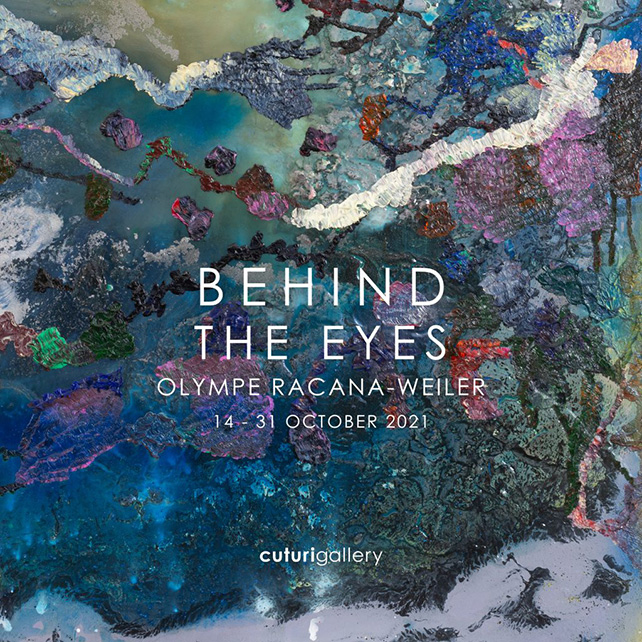 Cuturi Gallery is proud to present Behind The Eyes – a solo exhibition by Olympe Racana-Weiler (b. 1990, France) that also marks her first solo presentation in Asia. With an entirely new selection of works, Racana-Weiler explores the diverse temporalities of our existence where memories, lived experiences, and emotions collide. At the heart of her paintings is an artistic process that refuses to be underpinned by the need for a structured narrative.

In her own words, Racana-Weiler likens her creative process to be “dynamic motions that radiate from her body.” Refreshingly expressive and unconfined, her gestural painting style stems from her background as a dancer which has over time helped her to develop a sensitive awareness of space, light, and movement. Through bodily movements, Racana-Weiler demonstrates her passionate persona and inexhaustible creativity. Her affinity to dancing can be reminiscent of pioneering abstract artist Wassily Kadinsky, who similarly painted explosions of colours, wandering lines and explored the boundaries of painting through music.

Setting an emotional tone for the scene, Racana-Weiler’s linen canvases are fertile ground for different materials to breathe, push and tear up against but never overpower one another. The artist creates a collective beauty on a backdrop of acrylic hues by layering unconventional materials such as lithographic ink, graveled pigments, polyurethane, signage paint, and enamel spray all onto the same canvas. Akin to the materials used in her paintings, her canvases rarely act as an entity of their own. Acting as an extension of an unfinished thought or conversation, her works can be perceived as diptychs, triptychs, or parts of a disjointed painting.

Olympe Racana-Weiler  is a French painter who lives and works in Paris. In 2014, she obtained her BFA in Fine Arts and Arts Sciences at Université Paris 1 Panthéon-Sorbonne – Centre Saint-Charles. Since then she has participated in various notable group shows in Europe.