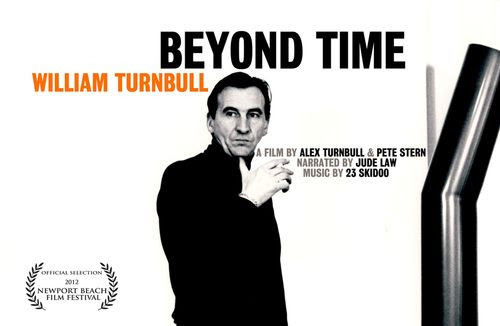 Beyond Time is a journey into the life and work of artist William Turnbull, from his modest roots as the son of a Dundee shipyard engineer to his standing as one of the world’s most highly regarded modern sculptors.

A cast of distinguished contributors including Anthony Gromley, Peter Blake and Nicolas Serota explore Turnbull’s formative experiences as a wartime pilot in the Far East, followed by a galvanising spell in Paris with contemporary masters such as Picasso, Brancusi, Leger and Giacometti. Returning to London at the beginning of the 1950s, Turnbull co-founded the Independent Group with Richard Hamilton and Eduardo Paolozzi, widely regarded as a precursor to the Pop Art movement.

The film also examines his popularity in North America, and friendships with Mark Rothko and Barnett Newman. Secretive and somewhat mysterious, William Turnbull went on to enjoy a hugely successful career as a sculptor, painter and printmaker.

The film includes a segment on artist Kim Lim, his wife, and the impact she had on him.

Admission is free, so is the popcorn!