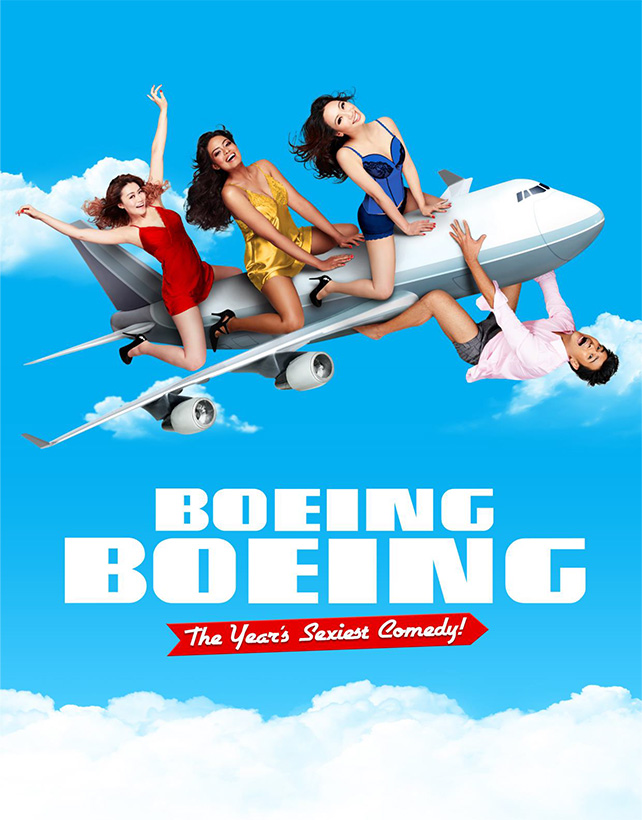 Fasten your seat belts and get ready for a mile-high adventure as Boeing Boeing flies back into town! Come June 2017, W!LD RICE’s acclaimed production of this Tony Award-winning comedy will have audiences rolling in the aisles of the Victoria Theatre.

W!LD RICE’s Boeing Boeing first opened at Raffles Hotel’s Jubilee Hall in October 2002. It was the first production to set the play in Asia. Due to overwhelming popular demand, Boeing Boeing has been re-staged twice – in 2005 at the Victoria Theatre and in 2010 at the Drama Centre Theatre. All three productions played to sold-out houses. 15 years later, Boeing Boeing soars back onto our radar in the capable hands of director Pam Oei, who was part of the casts of both the 2002 and 2005 productions.

It’s a swinging bachelor’s dream come true: three beautiful air stewardesses, each taking her turn as his girlfriend… and each happily unaware of the others’ existence. Sounds impossible? Not if you’re Bernard, our modern-day Casanova! With careful, down-to-the-minute scheming, he’s managed to keep his hectic love life cruising at the perfect altitude.

But turbulence ensues when his friend Robert comes to stay. Suddenly, Bernard’s schedule falls apart, as typhoons, volcanic ash and speedier planes wreak havoc on his precision planning. Can Bernard ride out the storm? How long can he keep it up? Fasten your seat belts – Boeing Boeing will take you on a mile-high adventure you won’t forget!