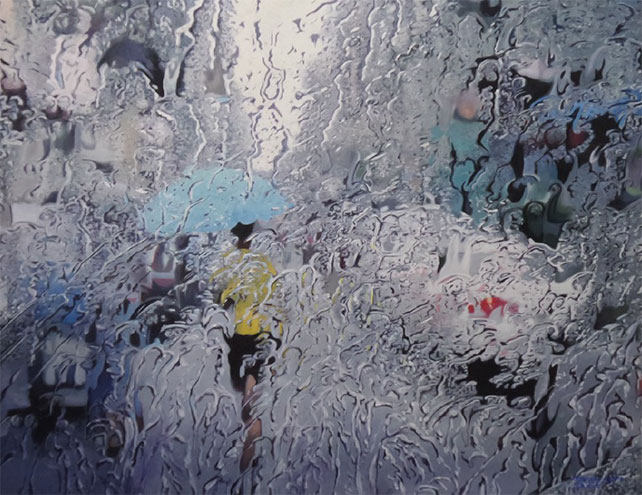 Burmese Season is a group show by three artists, Soe Soe, Khin Zaw Latt and Nyein Chan Su. While Soe Soe and Khin Zaw Latt’s artworks colourfully celebrate the monsoon rain in Yangon, Nyein Chan Su’s series allude to the cult of the “Nats”, an important religious practice in Myanmar (the Nats are spirits of people who died violently), and to family celebrations. The exhibition also includes a portrait of Aung San Su Kyi, the iconic leader of the country.

Born in 1973, Nyein Chan Su, mostly known as NCS, had a traditional training in painting at the State School of Fine Arts in Yangon. Despite the closing of his country to foreign influence until recently, NCS has adapted his artistic practice to the most cutting edge artistic language. Well established both in Myanmar and internationally, NCS was nominated for the prestigious APB Signature Art Prize 2011 organized by the Singapore Art Museum.

Born in 1967 in Laputta, Ayeyarwaddy Division, Myanmar, Soe Soe decided to devote his life to painting and to become a full time artist at the age of 18. Since then, he has extensively exhibited is work in Myanmar and abroad, in Belgium, United Kingdom, Hong Kong, Malaysia, Nepal, Singapore, and USA. In the 2003 Myanmar Contemporary Art Exhibition, Soe Soe was chosen as the top 30 out of 296 artists, and his works were subsequently exhibited in the 2004 Myanmar Contemporary Art Exhibition.

Khin Zaw Latt was born in 1980 in Laputta, Ayeyarwaddy Division, Myanmar. He grew up in a family of artists, his father being a pianist, his mother a Myanmar traditional dancer and one of his elder brother a painter. He started drawing at a very young age. From 1998 to 2002 he attended the University of Culture in Yangon, where he studied painting. After receiving a honorary mention at the 2004 Myanmar Contemporary Art Award he was the winner of the 2008 Myanmar Contemporary Art Award. He was a finalist in the 2009 Sovereign Art Prize and won a first prize at the first ever Myanmar national portrait competition, in 2011. 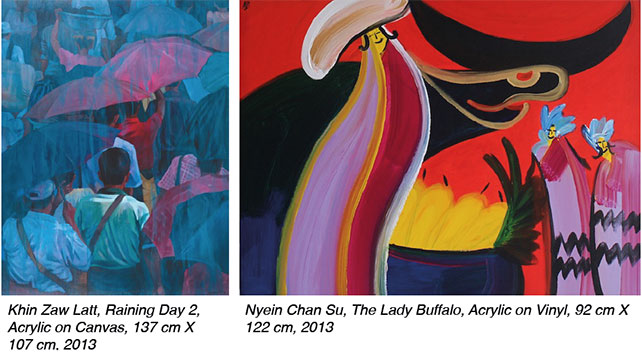