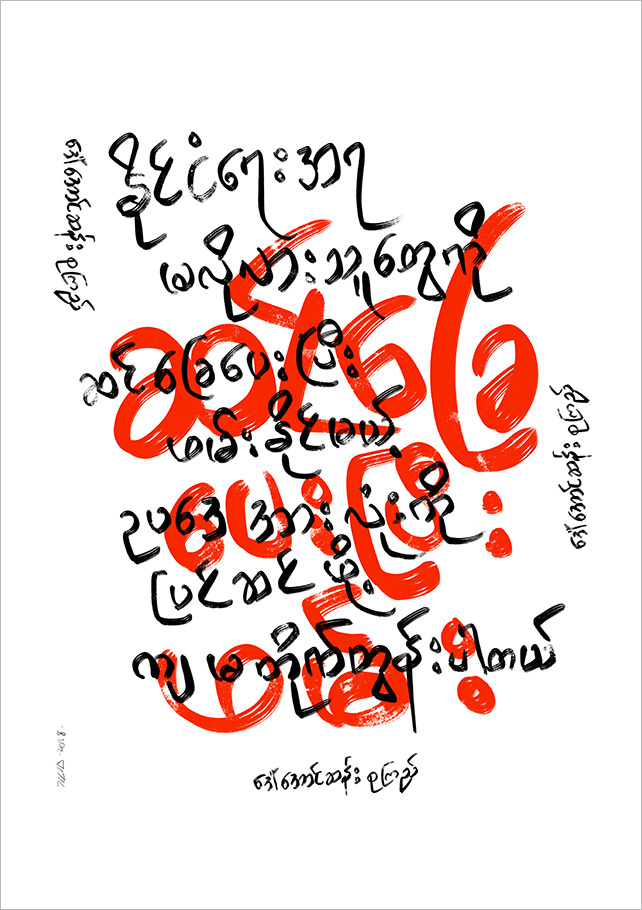 The purpose of this exhibition is to show the involvement of the artist community on the long and hazardous road to democracy, as well as their role as memory keepers. The selection of artworks created from 2012 to 2015 shows how lucid they were in expressing mixed feelings in a time of widespread enthusiasm. More recent artworks illustrate how the artists respond to the current situation in their country.

“Burma Khit” and “Red Spirits” series by Nyein Chan Su recall significant events of the contemporary history of Mynamar. While “Burma Khit’ is based on a family photo of the artist , “Red Spirits” uses archive photos of the 1988 demonstrations, which the artists entirely covers with red paint, to pay hommage to the students who were killed during these events. “Red Me”, a video created in September 2018, just a few days ago, is a warning about a possible new explosion of violence. 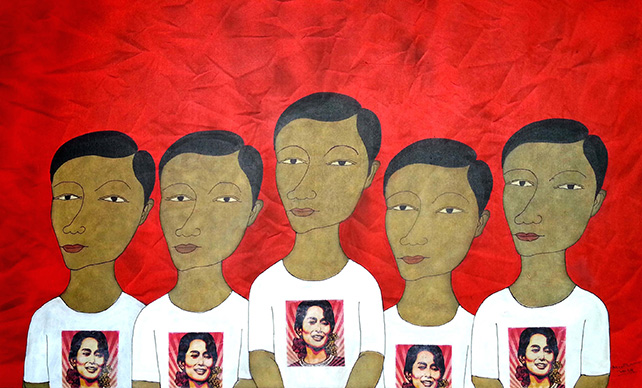 “The Loss of Identity”, a colourful and apparently joyful paiting in a cartoon style, created by Min Zaw in 2015, expresses the pessimism and discomfort of his generation, who grew up with the feeling of being dispossessed of any hope and future.

“Loving Kindness”, an installation by Phyu Mun and Chan Aye, two major contemporary artists, is a remake on much smaller scale, of huge installation created for a seminal exhibition titled “7 Decades” which took place last July 2018 in Yangon in the “Secretariat ”building. It refers to the tragic events of the “Saffron revolution” and the involvement of the Sangha (the monks’ community) in the uprising.

In 2015, Tartie had also created a painting series titled “Loving Kindness”. Loving Kindness refers not only to the Buddhist value known as “Metta” but also to Aung San Su Kyi’ main belief underlying her political action, as recorded in a series of conversations with writer Alain Clement in “The Voice of Hope” first published in 1997. 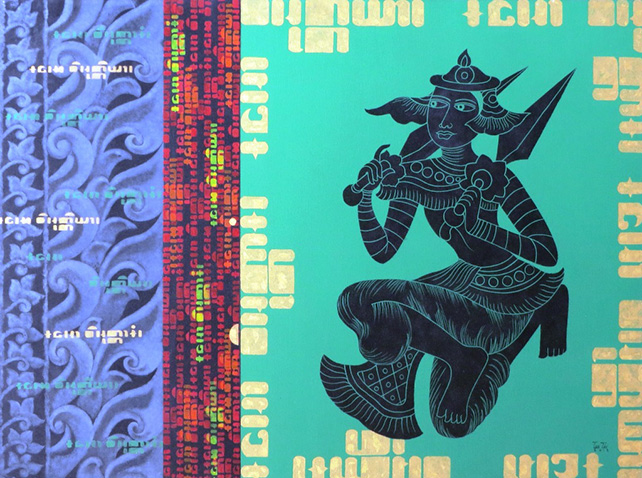 While Tartie was paying hommage to Aung San Su Kyi as a devout buddhist and fearless politician, Aung Soe Min’s series “Crisis of Buddhism” was inspired by the religious riots. “Time O’Clock “, a painting of this series, depicts Samsara as an entrapment. The paiting conveys its message through balck and red brushstrokes on a white background. A dark figure is emprisoned in a black clock symbolising a never ending ignoranc whie the red colour inside the clock is a metaphor for the religion.

Prints by Dau Dai and Bart Was Not Here illustrate the much direct mode of expression, which prevails in the younger generation.

In the wake of the recent 7 years sentence inflicted to two Reuter’s journalists, this exhition highlights how a group of artists use their art practice as a conduit for freedom of expression.