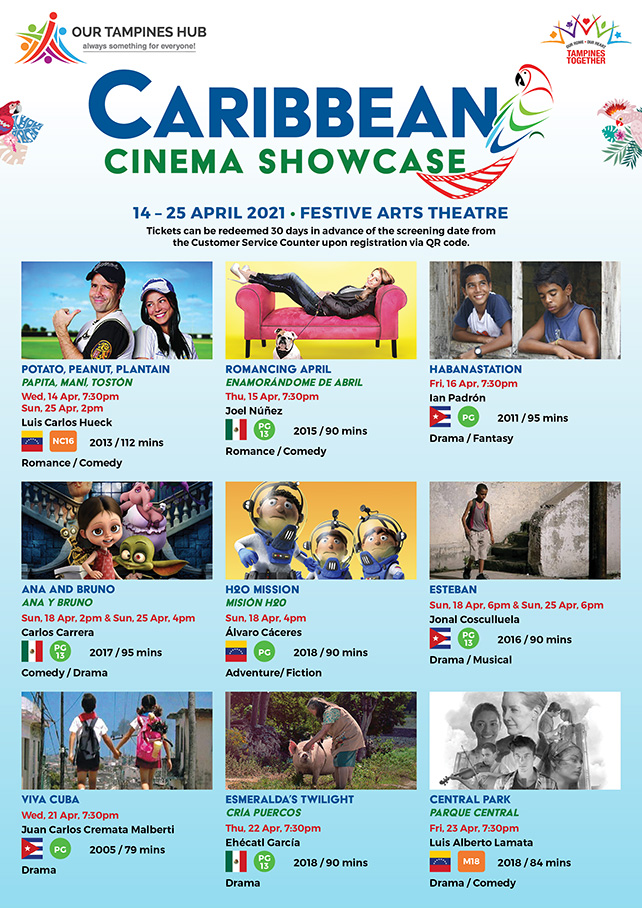 The Embassy of Cuba, Embassy of Mexico and Embassy of Venezuela present the first ever Caribbean Cinema Showcase in Singapore. The showcase will take place from 14 to 25 April 2021 at OTH’s state-of-the-art Festive Arts Theatre, and aims to share the richness of Caribbean cinema and culture with the public in Singapore. Nine films have been selected to cater to a wide audience; whether you come to watch a movie with the family, to enjoy Latin American cinema, to learn about different cultures, or to immerse yourself in the Spanish language, there is something for everyone.

The opening film for the showcase, ‘Esteban’, comes from La Havana, Cuba. It will be screened at a by-invitation-only event on Sunday, 11 April 2021. Esteban will also be screened for the public on the following two Sundays (i.e. 18 and 25 April). It tells the story of a Cuban boy of the same name who discovers a source of satisfaction and happiness in music. After accidentally showing an innate talent for playing the piano, the young Esteban will fight with all his heart to reach his greatest dream: becoming a renowned musician. Esteban is a dramatic story of hope and personal transformation that features a soundtrack created by Chucho Valdés, renowned Cuban pianist with a powerful influence on the modern history of Afro-Cuban jazz.

Meanwhile, one of the films that Mexico presents is the internationally awarded animated film ‘Ana and Bruno’. In this story, Ana arrives with her mother to the beach, where she meets and befriends a number of strange and amusing fantastical beings. She experiences a series of exciting and dangerous adventures as she goes in search for her father, accompanied by her new friends.

As for Venezuela, it will showcase the animated film for kids ‘H2O Mission’ (among other movies) for the first time in Singapore. In this eco-friendly adventure, the evil ‘M’ steals all the water from Buenaventura and kidnaps Sara, Samuel and his friends aboard the mighty ‘Engine of Knowledge’. The film focuses on promoting positive values of caring for our water resources.

Admission: free
Tickets can be redeemed at Our Tampines Hub’s Customer Service Counter upon registration via scanning of the QR code. One person is entitled to two tickets only on a first-come-first-served basis.