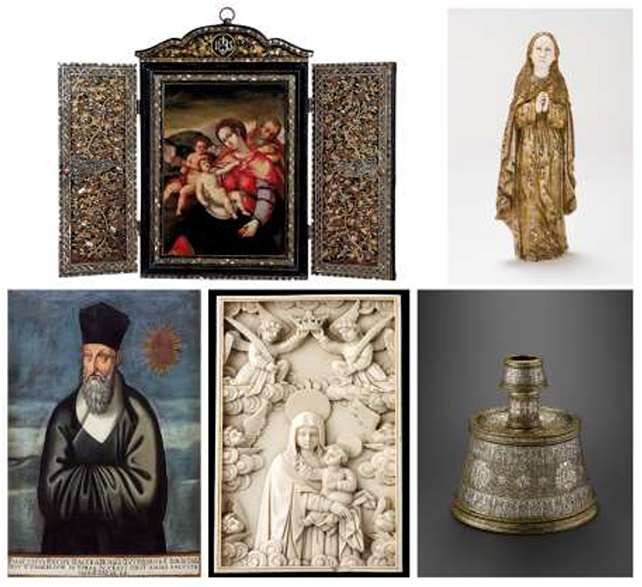 Clockwise from left: Shrine with a painting of Holy Family with John the Baptist, The Virgin Mary, Candlestick with Christian scenes, Plaque: Virgin and Child crowned by angels, Portrait of Matteo Ricci

The Asian Civilisations Museum (ACM) presents Christianity in Asia: Sacred Art and Visual Splendour, the world’s first exhibition on the history and spread of Christian art in Asia. This is also the ACM’s inaugural special exhibition after an extensive revamp last year.

Asia has played a significant role in the spread of Christianity since the 7th century and Asian art absorbed influences from many different cultures, including the Middle East, India, China, Japan, the Philippines, and Southeast Asia. Many of the artists who created Christian images belonged to other faiths, but nonetheless made powerful and beautiful images. Asian art often blends European Christian subjects with local motifs and patterns, or is made in distinctive local materials.

The exhibition looks at art spanning across 800 years from the 13th to the 20th century, with a special focus on the period from 16th to 18th century, where significant trade and missions occurred. Over 150 objects from six countries – Singapore, France, Portugal, Italy, Hong Kong, and the Philippines – and 20 acclaimed institutions and private collections around the world, including the Musée du Louvre, the Bibliothèque nationale de France, and Lisbon’s National Museum of Ancient Art, will be on display. They will be complemented by objects from ACM’s rich collection, including a largest known Sri Lankan ivory sculpture of the Virgin. Many of these objects will be exhibited for the very first time in Singapore.

The exhibition reflects the museum’s vision to present a broad perspective of pan-Asian cultures. Director of the ACM, Dr Alan Chong, said: “Christian art in Asia was created by artists of many different faiths: Hindu, Muslim, Buddhist, Confucian, and so on. New motifs and materials were used in these objects, which reflect many heritages. Moreover, many of the images were collected by patrons who were non-Christian. This demonstrates the curiosity and openness evident throughout Asia, especially in the 16th and 17th centuries.”

The exhibition is organised in four thematic sections: Early Christian Art in Asia, What makes art made in Asia, Christian, Christian missions to Asia, 16th to 19th centuries (The Indian Subcontinent, China, Japan, Philippines and Southeast Asia) and a case study of Singapore. Visitors will be introduced to artworks that examine the different interpretations and adaptations of the well-established Christian themes by local artists and artisans, who may not be Christians themselves, or were from countries that were predominantly non-Christian such as Syria, India and Iran. An example would be an inlaid metal candlestick made in Syria between 1248 and 1249, which was decorated with both Christian scenes and medieval Islamic art. New Christian motifs were also introduced such as the representation of Christ as a good shepherd by India, which eventually became familiar mainstays in Asian Christian art.

Beyond the design of the objects, the exhibition also demonstrates the knowledge exchange between Asia and the West in terms of art techniques like ivory carving which were then unknown in the West but grew in popularity after, and the use of rare materials found in Asia, including rock crystal, ivory, lacquer, mother-of-pearl, tortoiseshell and precious stones.