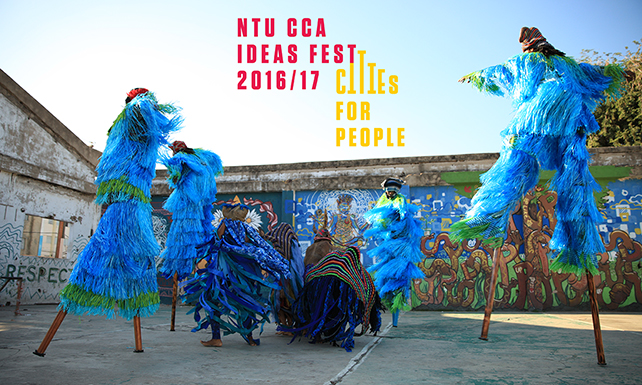 Laura Anderson Barbata in collaboration with the Brooklyn Jumbies, What_Lives_Beneath, 2016. Photo by Lauren Matic. Courtesy the artists. Developed with Barbata’s fellowship at the TBA21 The Current during the convening in Kingston, Jamaica.

CITIES FOR PEOPLE is the pilot edition of NTU CCA Ideas Fest, an annual platform to catalyse critical exchange of ideas and encourage thinking “out of the box”. It is a bottom-up approach linking the artistic and academic communities with grassroots initiatives. This pilot edition expands artistic interventions and engages contemporary issues such as air, water, food, environment, and social interaction, in connection to artistic and cultural fields, academic research, and design applications.

The 10-day programme, coinciding with Singapore Art Week 2017 and Art After Dark at Gillman Barracks, comprises a conglomerate of performances, public installations, participatory projects and social experiments, urban farming initiatives, public dialogues, and a variety of workshops. It cumulates in a three-day Public Summit that brings together a prominent group of architects, theorists, researchers, curators, and community groups from around the world to discuss and exchange ideas about urbanism, environment, modes of exchange, critical spatial practices, and to envision a future city. CITIES FOR PEOPLE offers a platform to contemplate the possibilities for our shared space, reformulate our demands accordingly, and project solutions and desires for the future.

Highlights of CITIES FOR PEOPLE include:

World Cafe: Air, Land, and Water, a public dialogue session led by artist and architect Marjetica Potrč (Slovenia/Germany), where participants engage in discussions on topics of urgency relating to air, land, and water, projecting their desires for a Singapore 30 years from now. Participants will also have the chance to present the outcomes of their discussion to invited representatives from relevant state agencies;

Ocean Blue(s), a cross-disciplinary performance by artist Laura Anderson Barbata (Mexico/United States) and the African-Caribbean group Brooklyn Jumbies (United States), is based on first-hand experiences, research, and ancient wisdom. It charts the physical and emotional relationship with the ocean, highlighting the ocean as a habitat and important resource, especially for islands. The work combines dance, spoken word, stilt dancing, costuming, and music into a unique performance;

Keyword Laboratory: “Socio-botanic”, a workshop by Xu Tan (China) that invites local practitioners engaged in the social practice of urban farming to share how to grow, what to plant, and why. The workshop takes a hands-on approach, allowing participants to handle samplings of plants, seeds, and soil. A collection of six videos of interviews with urban farmers in China and Singapore, the latter he filmed during Xu’s time in the NTU CCA Singapore Residencies programme, will also be on view;

Rehearsal by Post-Museum (Singapore) is a social experiment stemming from the urge to incite and foster public discussions in Singapore, addressing the city and how to organise collectively. This iteration will take the form of a campsite at Gillman Barracks that invites the public to stay, eat, and live together over a period of three days and two nights;

The Harvesting is a NTU CCA Singapore initiated platform for knowledge exchange on food source that spans two weekends. It will feature urban farming initiatives and workshops by individuals, grassroots, and community groups in Singapore such as Edible Garden City, Foodscape Collective, urban farmer Michelle Lai, and urban-rural researcher Victoria Marshall (all Singapore).

CITIES FOR PEOPLE, a term borrowed from Singapore architect William S. W Lim’s 1990 book with the same title, expands on some of the ideas Lim developed, particularly in relation to tropical environments and recycling, as well as his call for a humanistic architecture. Organised on the occasion of the exhibition Incomplete Urbanism: Attempts of Critical Spatial Practice,this event is an invitation to share and engage in cooperative projects and collective experiences that critically reflect on current challenges in urban development and future habitats.