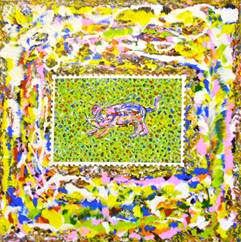 After the success of Voice of a Karung Guni in 2015, self-taught artist Tan Chong Bin returns with a new exhibition at AC43 gallery! “Classic Stamps” features over 20 works from Tan’s latest series of acrylic paintings, as well as selected mixed-media sculptures. The series, which began in 2015 and continued till 2016, comprises altogether 72 different creative designs inspired by the illustrative format of poster stamp.

Born in Singapore in 1952, Tan is a rag-and-bone man by profession (also known in local colloquial term as “karung guni man”). Tan was never schooled; he is illiterate and speaks very minimal Mandarin, and usually communicates and expresses himself in Hokkien (a Chinese dialect).

Tan’s passion for drawing flourished at the tender age of 8. Being uneducated and financially challenged did little to deter him from happily dedicating decades to art-making. Over the years he managed to observe and travel around Southeast Asia in a bid to learn more and enhance his art practice. In November 2014, Tan achieved an important milestone when his acrylic painting submission, 千变万画 (Endless Transformation) earned a Special Commendation award at the 2014 UOB Painting of the Year Competition in Singapore.

Tan participated in his first group art exhibition in the 1970s. In the 2000s, he created a notable series of mixed-media works by assembling found objects (from his junk collection) and painting on them. These art pieces were subsequently shown at environmental art fairs in Singapore. However, apart from such piece-meal experiences, Tan never really had the platform to showcase his artistic talent.

Through his paintings and sculptures, Tan explores the order and inter-relatedness between men and things in our complex universe. His compositions are characterised by a fluid, spontaneous style, often executed in thick impasto and bright, vivid colours; they express Tan’s colourful world and quick-witted thoughts, proving that a lack of verbal eloquence does not equate to a dull, unintelligible mind.