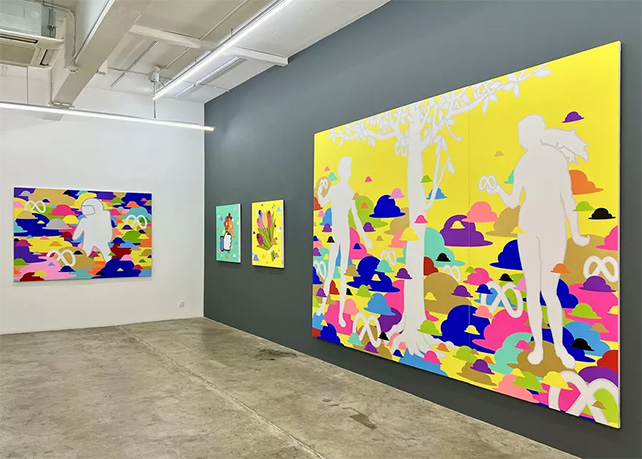 “Cloud” has been an indispensable art subject matter since ancient times, from Chinese literati paintings to the Western impressionistic take on the cloud. Mountains, waters, and clouds are monumental landscape paintings’ three essential pictorial elements. Outside the visual art studies, the cloud may be one of the most valuable metaphors of all time in plays, poems, songs, and novels, from philosophy to design. Moreover, the semiotics of cloud ranges from motifs, framing devices, poetic imagery, and a desktop icon. The cloud’s ubiquity reminds us, perhaps, that it is humanity’s most significant icon in history and today.

In Leo’s contemporary take on the cloud, his clouds are all-embracing and full of colours, be it totalitarian that covers the canvas or as a guest in his many portraitures of painting. There are always clouds or a piece of cloud in his works, which is the same in everyone’s hearts, likened to there are countless colourful clouds, just like everyone’s dream, and maybe one or more will come true. Leo’s cloud evokes memories and also transcends a vision of the future. Contrary, in ancient Chinese symbolism, clouds were created between earth and heaven; they symbolise the celestial realm. Clouds are considered the union of Ying and Yang because they are a fusion of the elements of water and air, sky and earth. Moreover, “Yun”, the word for clouds, sounds like the Chinese word for luck and fortune; therefore, the two became intrinsically connected. In this hybrid of modern beliefs and ancient connotations of clouds, Leo narrates the story of life, its social issues such as popular culture like social media and fake news, and human behaviour and societal relations in our current times.

In “Genesis,” the meme abstract representation of Adam and Eve set in a colourful garden of clouds is probably Leo’s overarching concept work for this series. The work delves into how the progress of science and technology is subverting the inherent concept and lifestyle of humanity, as mankind uses advanced technology to create a virtual world, the “meta-universe” of Eden, just as God created the garden of Eden, and also created Adam and Eve. Here, Leo questioned whether human beings could build a new and perfect world in the virtual world or just a beautiful illusory bubble. Whether the difficulties encountered in the current real world be solved in the virtual meta-universe? Or, will the virtual world created by us lead humankind to a higher stage of civilization? The cartographic metaphor of whether the virtual world will replace the real world is a question that human beings should think about and pursue. The development between human nature, science, and technology should question whether the meta-universe makes us rethink whether a new world is more equal, open, and inclusive than the real world or whether the utopian world can be realized in the meta-universe.

From Calligraphy to modern and contemporary landscape or abstract landscape painting, its cognate aesthetic form also relies on the cloud for its dynamism. In the words of theorist and imperial court artist Zhang Yanyuan (c.815 – c.875), the most critical of all brushstrokes was “a cloud stretching for a thousand miles.” Since the earliest beginnings of the imperial state, official calligraphers and painters were urged to move their wrists with a swing “as rising clouds over a great mountain.” As it said, the cloud seemingly in the realm of visual art defies exact definition. Clouds are thus both natural phenomena and generative entities whose propensity gestures towards liminal realms, the great clouds of unknowing. In Leo’s vision, the cloud represents the known – unknown, the past, now, and the future.