Dichotomy of an Artist 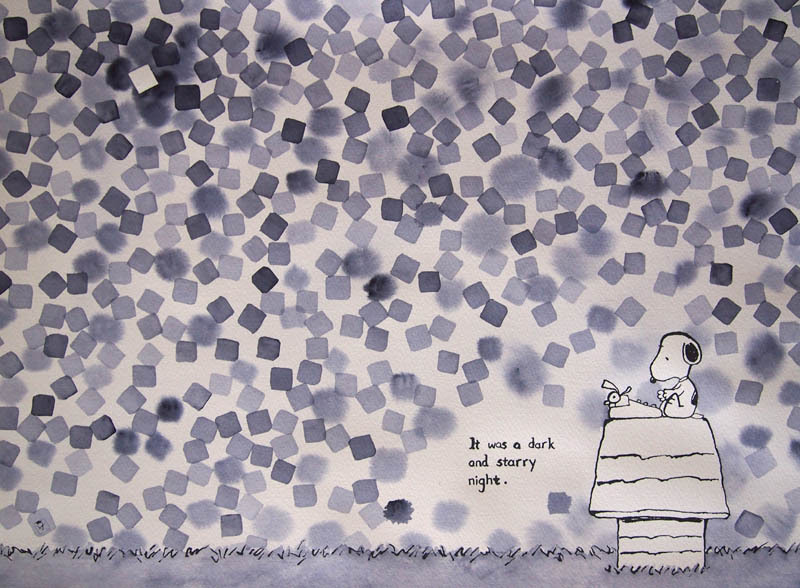 Dichotomy of an Artist is about an artist finding his way outward by looking inward. Since exploring traditional Chinese ink painting in watercolour form in his last solo exhibition, Singaporean Aaron Gan has developed two divergent directions to his watercolour practice: a further exploration of Chinese painting, this time in colour with unique, stylized calligraphy; and a dense agglomeration of monochromatic squares referencing the starry night sky. The latter series won him a Gold Award at the 34th UOB Painting of the Year Competition in 2015, with its meditative large format patterning and infinite view afforded by the mirrored frame.

Dichotomy as an exhibition is much lighter in spirit than last year’s Life as Art which was austere, Zen and spiritual. Several cartoon characters have crept into the starfield as line drawings, and transitioned into full-colour constellations in their own right. The calligraphy in the other series takes on a frenetic life of its own, battling with the lusciously-coloured subjects using style and showmanship rather than legibility. Words adopt squarish stances, get stretched and sheared and meander off into spidery trails. Subjects and calligraphy dance in an ordered engagement for balance. And in his dichotomy, Aaron discovers direction in two vastly differing styles.