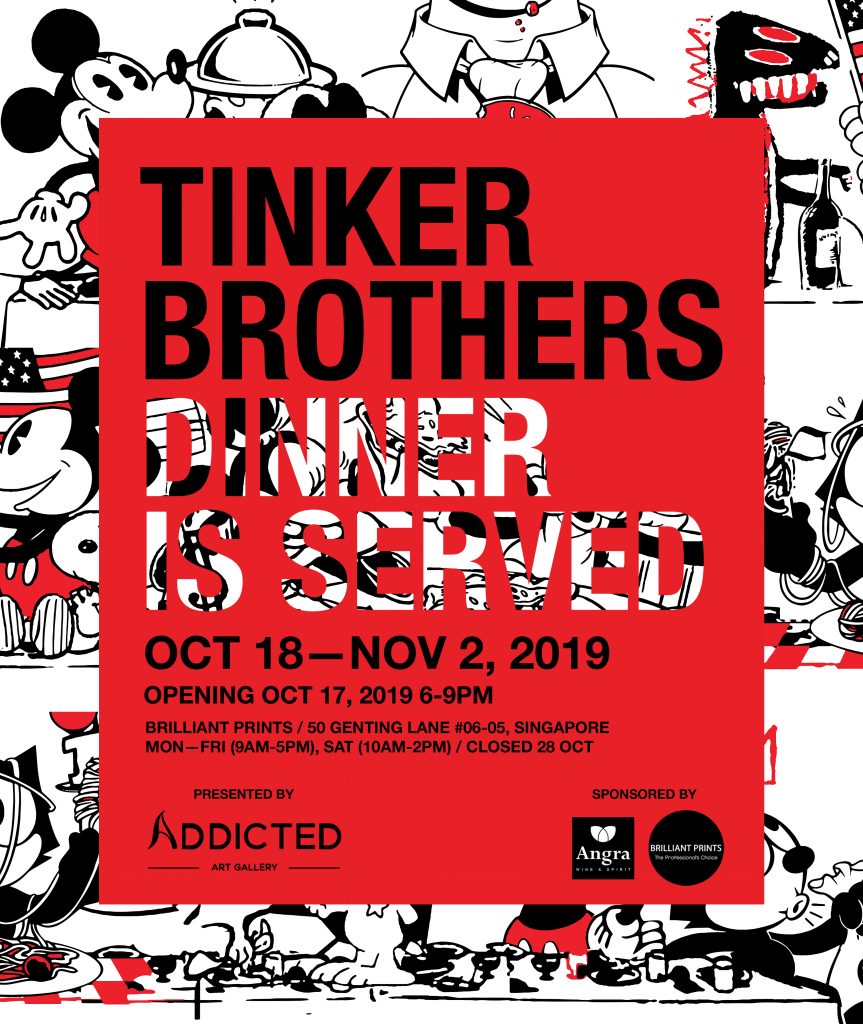 Trapped in an office on a Tuesday afternoon with weekend freedom many water cooler procrastinations away, it’s not hard to drift off into an alternate reality where you’re the mastermind of a successful heist, leading to a hasty move to Mexico and a lifetime of Cervezas on the beach. Turns out, even artists have hump days to hurdle too. And like us, their fantasies can be a little greedy and gun slinging. Look no further than pop art bandits, the Tinker Brothers and see what they manage to get away with in their latest exhibition, ‘Dinner Is Served’. It’s as tasty as it sounds – featuring past work, as well as a new limited edition print series.

A darker look at the scrappier side of Snoopy, Felix the Cat and Mickey Mouse, each artwork comprising the ‘Dinner Is Served’ exhibition is grimacing with the bold, acerbic wit and mischief of the Tinker Brothers. Read: guns, raining dollar bills and shady deals – while wearing shades. Subverting pop culture characters and throwing them into gangsta-land scenarios, where they look downright laconic, is perverse work. And this is the sick pleasure of each piece; the artists know it’s sacrilegious for Mickey to point a gun in your face, but they’re not making this art for them, they’re just amusing themselves. And if a wry smile passes your lips while looking too, then hello! You’ve found your people. Welcome to the no holds barred humour of the Tinker Brothers.

For all the tongue in cheek humour, don’t miss the point. Using recognisable characters in unexpected ways is a vehicle for making some insightful and damning observations about the way we live right now. Far from screens and make believe, the violence in this new series is all the more shocking because of its simplicity. If only villains were so obvious these days. Vigilantes and white collar criminals; conspiracy theorists and populists; compulsive consumers and influencers; trolls and fake news; cultural conflicts and arbitrary borders. We’ve taken to taking matters into our own hands, every man for himself, and our weapon of choice is a keyboard and a smartphone. In a world seemingly spinning slowly out of control, the Tinker Brothers might just be trying to warn us of the lunacy of being sucked in to the power vacuum, and behaving completely out of character.