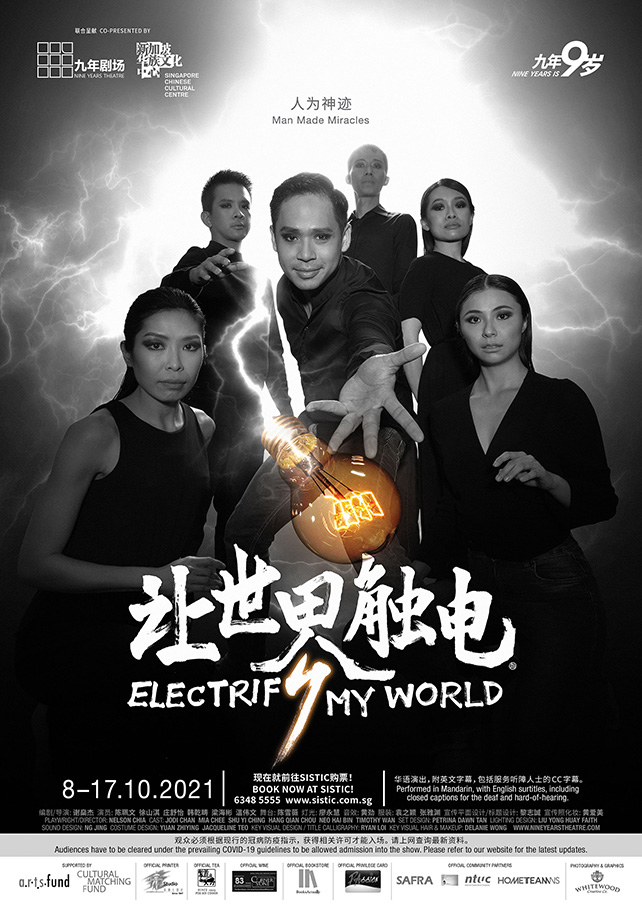 To mark the end of Nine Years Theatre’s production season this 9th anniversary, the company is presenting Electrify My World, an original work written and directed by 4-time award-winning director, Nelson Chia. The original cast of First Fleet and Lear Is Dead – Jodi Chan, Mia Chee, Shu Yi Ching, Hang Qian Chou, Neo Hai Bin, and Timothy Wan join hands once again to bring forward a brilliant performance about one man’s ambition and aspiration against another’s. This is another production co-presented by Nine Years Theatre and Singapore Chinese Cultural Centre following the success of their earlier collaboration, First Fleet.

Inspired by historical events, the play centres around the controversial feud between two scientists, Thomas Edison (Timothy Wan) and Nikola Tesla (Neo Hai Bin). In a period where scientists were rapidly developing new inventions constantly, what does it take for a genius to realise his ambition? Is pure genius all it takes to achieve one’s aspiration, or does it take more? Through the conflict between the two scientists, famous for their debate on using different current electrical systems to light up New York city, audiences will follow an emotional and intellectual journey into the unspoken fears behind all their brilliance. As Edison and Tesla battle against each other in a race to light up New York, and possibly the world in this power-charged play, audiences will be jolted into seeing Science and Humanity in a new light.

Chia has also weaved surprising encounters between the two scientists and other characters in this original script – such as Mary Shelly, author of the novel Frankenstein, and a Pigeon! These characters, who are the manifestations of the scientists’ state of mind, will be interacting with them throughout the play.