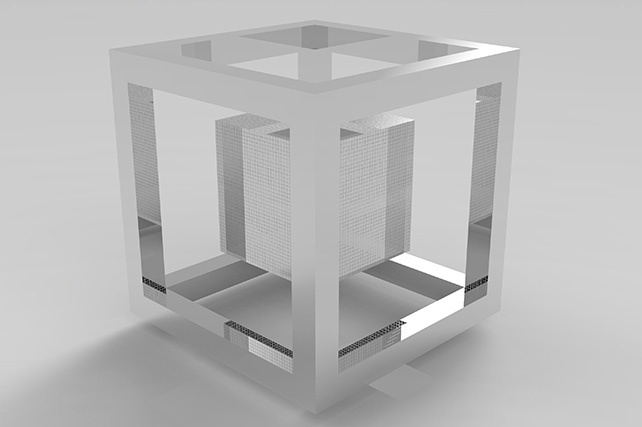 In October 2015, Zhang Ding’s solo project titled Enter the Dragon took place in the ICA Theatre, London. During when, 26 musicians from Europe, the U.S. and Asia from a variety of musical genres and backgrounds were invited to take the challenges of 13 nights of improvisation, including acoustic, ambient, drone, experimental, industrial, punk and techno, etc. The space was transformed into an immersive installation — a hybrid of a sci-fi discotheque and a futuristic super club. On 21st May 2016, Enter the Dragon II set its foot to Shanghai in the form of duo opening hosted in the chi K11 Art Museum. Zhang Ding adopted reflective surfaces and integrated amplifiers to create a site-specific ‘mutating sound sculpture’ as well as a platform for experimentation and self-reflection. For 8 performances that spanned over one and half months, high-powered reflective installation and matrix sound system were reset every Saturday night till 25th June. The sensory challenges prompted by the spinning mirror maze from the London project to the musicians and audience were escalated and transformed continuously by the variant structure of the museum space in Shanghai and Chinese musicians’ participation.

On 22nd and 23rd September 2016, Enter the Dragon will pace into Gillman Barracks, Singapore, in celebration of Gillman Barracks 4th anniversary. Along with local independent musician, this live music performance initialed by Zhang Ding and his Control Club will further develop his longstanding interests in ‘the stimulating and chemical interaction between sound, stage and the immediate emotional response of the audience’.