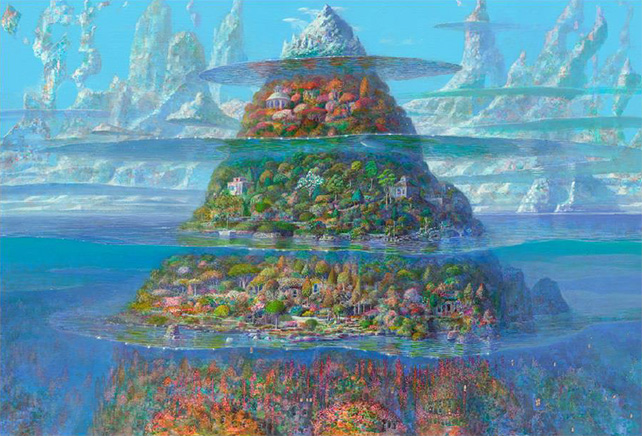 Beauty of All Seasons, Naohisa Inoue

Studio Ghibli is best known for its animation feature films, with notable pieces like Princess Mononoke and Spirited Away, which are loved widely by many. Polar Bear Gallery is pleased to present an exhibition of rare production celluloids – original artworks featuring some of the fascinating scenes from these celebrated films, traditionally hand-drawn before the advent of computer animation. This technique of celluloid animation requires extensive organisation and great attention to details, which will then be visualised through the mastery of studio animators.

These original celluloids are part of a private collection, and will be exhibited for the first time in Singapore. You can expect to see illustrations from films such as Porco Rosso, Kiki’s Delivery Service, Laputa: Castle in the Sky, and the iconic My Neighbour Totoro.

The gallery will also be featuring exclusively works by Japanese fantasy artist, Naohisa Inoue, who has created reference and beautiful background art for the Studio Ghibli film, Whisper of the Heart. His works were given a more direct adaption in the short film The Day I Harvested A Star, produced by Hayao Miyazaki and shown exclusively at the Ghibli Museum in Tokyo, Japan.

Most of Naohisa Inoue’s paintings are set in the magical realm of Iblard, a utopia he conceived where everyone’s experience is unique, and anything the heart desires can be manifested in this eternal land of beauty and nostalgia. According to the artist, those who love and believe in Iblard become citizens, referred to as Iblarders, and Hayao Miyazaki is one of them – he often speaks of a new way of observation, a way in which we ‘look through Iblard eyes’.