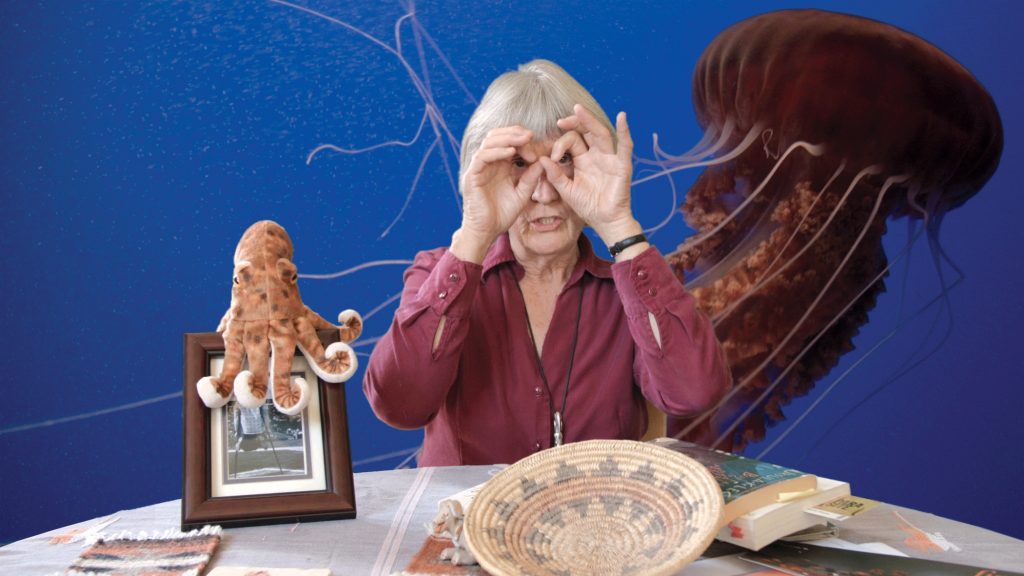 This film programme accompanies the exhibition, The Posthuman City. Climates. Habitats. Environments. It involves a selection of 11 artist films that expand on the exhibition’s topics, as well as two sci-fi classics.

Screening on loop during opening hours.

Waste Flow is one of two videos chronicling Ukeles’s ground-breaking performance Touch Sanitation (1978–80), in which she shook hands with over 8,500 New York City Sanitation workers to appreciate and destigmatise their labour. The film portrays a large grid of coloured photographic prints, and sundry text-based archival materials depicting the performance work.

This film consists of a single static view of a shanty town built on a vast rubbish dump near Jakarta, Indonesia. It begins in semidarkness before dawn, to broad daylight, and ends with the light shifting from dreamy twilight to daybreak. The entrance to the walled shanty town is framed in the centre, where roads intersect with people walking along them. The structure of the image is revealed and sobering even, as the viewer observes its details and actions in the changing light.

This feature documentary follows Vik Muniz, a Brazilian artist and photographer, on an emotional journey from Jardim Gramacho, the world’s largest landfill on the outskirts of Rio de Janeiro, to the heights of international art stardom. Muniz collaborates with “catadores,” pickers of recyclable materials who live on the landfill, to create photographic images of themselves out of garbage. The process portrays their plight; at the same time, the resulting work highlights their dignity, the transformative power of art, and the beauty of the human spirit.

Between the Waves portrays personal/political metaphors—embodiments of the queer, eco-sexual, inter-special, technological, spiritual, and scientific—within sensual, poetic, heterotopic landscapes. Neither bourgeois or asexual, the subjects can be read as assertively political in their local context, where freedom of speech and creative expression often face serious censorship. The immersive environments they are in represent spaces of refuge or expulsion, while their activities feel both archaic and futuristic, filled with urgency and agency. Multiple historic and mythological references are woven and problematised within the video. A Fable in Five Chapters touches on the ecological importance and parthenogenetic nature of corals and reef fish; Landfill Dance explores the potency of the geological, social, and cultural histories embedded in a landfill; Animation and Morse Code move between low-tech animation to the use of iPhone Morse code application; and Moon Burning highlights the cyclic nature of existence and impermanence, and the fluid entities of things and beings.

This German expressionist science-fiction drama film presents a futuristic utopian city that exists above a grim underground world populated by exploited workers who runs the machinery that keeps the utopian world above functioning. Freder, the son of the city’s master is intrigued by a young woman named Maria, who brings a group of workers’ children to the city and eventually learns about their living conditions. Freder seeks to be a mediator between the separating classes and this puts him in conflict with his authoritative father. This quickly culminates into a revolution that spells disaster for those involved.

This video draws a connection between the relentless reach for fossil resources and the impact on broad indigenous populations in remote parts of the world. Water and oil form the undercurrents of all narrations as they are activating profound change in the planetary ecology. The work documents communities living in the Deltas of the Global South that are building protective mud embankments by hand without any mechanic help. In Bangladesh, such measures are taken when large parts of the country become submerged and water is declared a territory of citizenship for populations forced to live on water.

In the year 2019, Rick Deckard, a Blade Runner and law enforcer, is forced out of retirement to hunt down and kill four illegally bio-engineered humans known as replicants before they kill more people. These replicants are androids that look virtually identical to human beings. They are designed with superior strength and higher intelligence but feel no emotions. Centred on the theme of humanity, the film examines the effects of technology on the environment and society; where other forms of natural life no longer exists and the future is depicted as both high-tech and hopeful in some places but decayed in others.

The film charts the entangled history of behaviourism, neuroscience, animal training, interspecies affection, and English-speaking dolphins. Its narrative starts on 25 February 2010 with a 911 call. Seconds after having completed a live performance at SeaWorld Orlando, Florida, a trainer Dawn Brancheau was dragged underwater, drowned and dismembered by Tilikum, a bull orca. He was Tilikum’s third victim. The film reveals details about the entertainment-industrial complex which SeaWorld is a part of, and the connections between the earliest oceanic leisure centres and Cold War military research, from Hammer’s research on the incident.

The film adopts an aesthetic style typically employed in ethnographic films by anthropologists from the 1960s and 70s when recording the cultures and traditions they study. In a series of vignettes shot on 16 mm film, we witness what seems to be an intimate ritual—one actually invented by the artist—among fishermen in a coastal village in North-eastern Brazil. The camera captures individual fishermen as they catch and then tenderly hold their prey to their chest until it stops breathing. There lurks an understanding that this gesture disguises violence as benevolence and suggests a symmetry between the power that humans wield over other life forms.

Donna Haraway is a prominent scholar in the field of science and technology, a feminist, and a science-fiction enthusiast who works at building a bridge between science and fiction. She became known in the 1980s through her work on gender, identity, and technology, which broke with the prevailing trends and opened the door to a frank and cheerful trans-species feminism. Haraway is a gifted storyteller who paints a rebellious and hopeful universe teeming with creatures and futuristic trans-species, in an era of disasters. The filmmaker Fabrizio Terranova visited Donna Haraway at her home in Southern California, producing this rare, candid, intellectual portrait of a highly original thinker.

With footage of oil palm plantations, active peat fires, and olive-related production sites in Java, Sumatra, and Kalimantan (Borneo), the film illustrates why the oil-farming business has grown so rapidly in Asia. Various stages of palm oil production are linked through provocative interviews with residents, activists, scientists, and government officials who express their often-conflicting views on the transformation of Indonesia into a palm oil nation. While the pace of production has positively impacted Indonesia’s GDP, the steep rise in demand for palm oil and its derivatives has dire consequences for Indonesia and its rainforests.

Seoul City Machine is an abstract sequence of vignettes, fragments and moments of a city where machines and technology are now the dominant inhabitants. It portrays the urban landscape of tomorrow; a city in which all of the fears and wonders of emerging technologies have come true. An AI chatbot voices its own creation story through its City Operating System to the citizens it affectionately manages. Using contemporary Seoul as a visual backdrop, the present-day city is overlaid with cinematic visual effects to depict an autonomous world where drones fill the sky, cars are driverless, streets are draped in augmented reality, and everyone is connected to everything.

The film is a dystopian sci-fi story that takes the replacement of waiters in Japanese restaurants by androids as its starting point. It explores complex existential problems due to the Uncanny Valley Hypothesis in the field of robotics: in which an android created too much in the image and likeness of a human faces rejection. The underlying themes of the video deal with the relationship between machines and humans based on the encounter between an android and its doppelgänger. Through this relationship and the implementation of Artificial Intelligence (AI) in everyday life, the film reflects the socio-economic paradigm effects by the technological transformation.