For Love Shines: An Ode to 200 Years of Philanthropy in Singapore 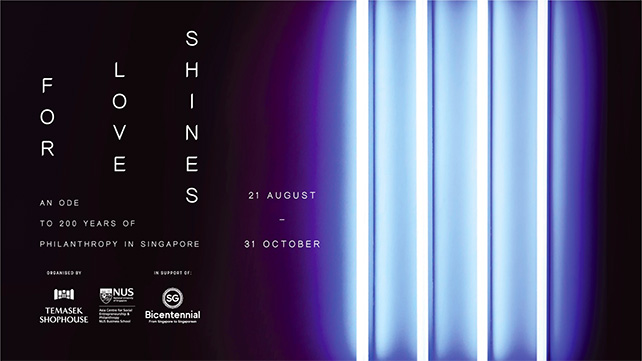 This exhibition aims to trace the story of giving in Singapore from its founding in 1819 until the present.

Officially accredited as a Singapore Bicentennial commemorative activity, the exhibition highlights five significant eras that demonstrate the evolution of Singapore’s philanthropy-scape and the different facets and mechanisms of giving:

– 19th century colonial era (1819 – 1900) Efforts were focused on primary needs such as building places of worship, burial and basic healthcare

– Nation-building era (1966–1999) During the development of the nation’s economy, volunteer groups and services sprang up to provide social services to those in need, while the government supported by introducing structures to better co-ordinate philanthropic donations and activities

– Professionalization and global-giving era (2000–present) Philanthropy had grown into an ecosystem comprising national bodies, private sector donors and the community