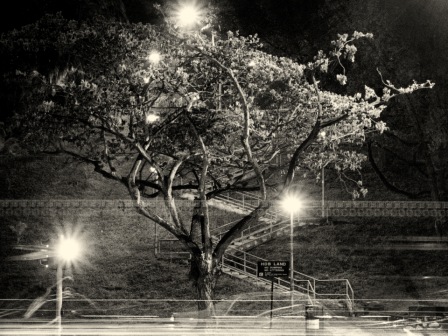 In conjunction with A Tapestry of Sacred Music

“The real voyage of discovery consists not in seeking new lands but seeing with new eyes.” – Marcel Proust

Garden City: 2011-2016 is an ongoing series of work based on the same name which Singapore is affectionately known as. The journey to re-examine the meaning of a garden city began when Ng once imagined a local tree in her old neighbourhood as a Christmas tree. The resulting works are stirringly beautiful images of Singapore captured at moments that are rarely seen, framed by delicately composed angles that reflect how the artist perceives Singapore as an urban city within a garden.

Listen, listen to the sound of the mind’s own utterance, within the womb of the beauty of Autumn, while the setting sun shows the red glory of her smile, hearing the bamboo flute which no one plays, listen to the reeds swaying in the breeze and the silent ripple’s song. – Chögyam Trungpa

The sound of silence is pure and beautiful yet rarely heard these days. And when we do hear it, we fear it because we don’t recognise it anymore. Come appreciate life in its pared down beauty, as we listen to our hearts and minds in the beautiful quiet through the works presented in this quarter.