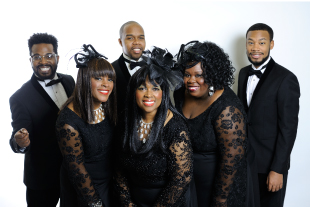 Gospel music has a 150-year history that emerged from the spirituals of African slaves and Sunday school choirs to televised evangelist movements and concert extravaganzas of Christian worship. It formed the backdrop of the American civil rights movement in the ’60s and later influenced popular music genres and the vocal styles of countless pop and R&B artists, including the likes of Whitney Houston, Mariah Carey, Alicia Keys and Beyoncé.

A premiere collective of vocalists and singers, Glory Gospel Singers (GGS) of New York is a passionate ensemble of some of the world’s most talented gospel singers. The award-winning ensemble was founded in 1995 by Phyliss McKoy Joubert and has achieved an impressive record of 192 tours in 188 countries with a roster of over 400 singers. Their performances have been heard at premiere venues including: Carnegie Hall, The Dom of Frankfurt, Theater Der Stadt of Heidelberg Berlin Philharmonic, St. Patrick’s Cathedral, Lincoln Center and more.

This April, the group makes its way to Singapore with a glorious repertoire of gospel classics from the ’60s and ’70s, including songs from Aretha Franklin’s Amazing Grace album and the tunes of Edwin Hawkins and other stalwarts of the tradition.