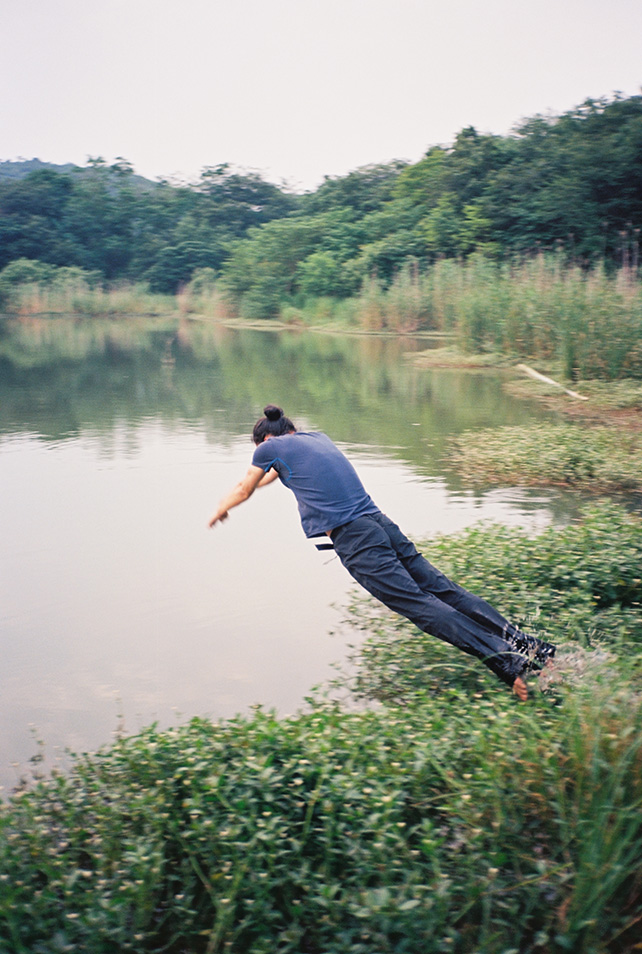 ‘Habitat’ celebrates the fluid yet grounded relationship between man and nature.

Takao Minami’s Puppet Study #4 (2010) is a video installation which consists of computer-controlled blinds and a video projection. The video alternates between a moving image of a waterfall and an abstract patterns as the blinds open and close to reveal and conceal the projection on the wall behind. Through this work, Minami explores the ways in which individual movements interrelate with one another.

A video work by Tang Dixin, Shooting the Moon (2016), documents his outdoor performance where he guided a group of participants into a forest. For him, the act of creating a path in an untamed territory and linking people with it has symbolic meaning.  Eventually, they reached a lake, and Tang started to “walk on the water” by using a bamboo pole. Tang uses his body to express the urge to challenge himself, and human beings’ ability, pushing the boundaries of what contemporary art can encompass. Zai Kuning has also been exploring the relationship between human beings and nature. The recent forest-burning in various parts of the world has led Zai to think further about these issues. Autopsy 2 (2017) is a sculptural work with pieces of burnt rattan and knives placed atop a stainless-steel table alike surgical setting. The artist wonders how big mankind’s greed can become, and to what extent nature can provide resources to Man.

Li Qing, in his work Tetris Window: Private Palace (2018), collects abandoned windows and incorporates them into his artworks. Li paints imaginary urban landscapes behind the glass pane, appearing somewhat futuristic yet not entirely Utopian, creating a new perspective to the urban environment and the concept of passing time. Chen Wei is also a keen observer of the urban Chinese landscape. In his work Mushroom (2016), one will see a rather bizarre situation whereby a house is equipped with many satellite dishes on and around it. The artist explains that at some construction sites, several contractors live together in a simple temporary house and in order to access satellite TV, they install the dishes by themselves. This reflects human beings’ desire to connect with the outer world, especially in this age of digital communication.