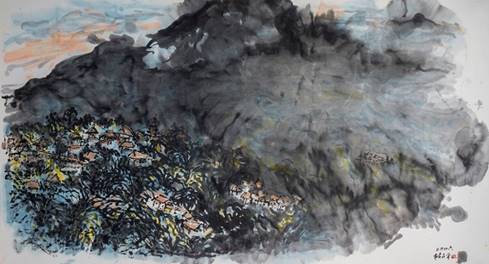 Veteran artist Lim Tze Peng, despite his early success, had never been contented with rehashing old styles throughout his long and varied artistic career. One would have expected the Cultural Medallion awarded to Lim in 2003 to have been the height of his career, and yet he continued to astound his followers and collectors with a series of imaginative, innovative, and out of the mould exhibitions, from Infinite Gestures (2006) to Inroads (2008-9). This was partly in effect to his advanced age, now unable to handle the bodily stress of painting en plein air. The artists Qi Baishi and Huang Binhong had set a precedent of attaining a changed and advanced aesthetic in old age, and Lim Tze Peng can be said to have joined this select canon.

The largest change in the format of his paintings was the move from traditional Chinese paper sizes (69 x 138 cm and 69 x 69 cm) towards far more monumental dimensions, and with it an increased vitality and strength in his brushstrokes. Whilst taking a more experimental stance in Infinite Gestures, his new works received public and personal acceptance in Inroad. Among his new followers was the Beijing-based curator Fan Di’an, who immediately began to plan the translation of the exhibition to Beijing. The success of Inroads (2009) in Beijing pointed towards a second peak in his artistic career, with his muddled calligraphy, large-scale river scenes, colour calligraphy, and abstract trees all having their genesis from this period.

artcommune proudly presents Heart Orientations: Lim Tze Peng’s Abstract Revolution. This exhibition will focus on the aesthetic change during the period of 2006-9, when his art took an unexpected turn towards a daring and visionary abstraction, taking on a distinct aesthetic language. Change, however, is never easily charted. By interviewing several players in the Singapore art world, this exhibition has attempted to pay deserved attention to extraneous factors contributing to his aesthetic revolution. His artistic turn is one that should be remembered and kept close to heart, and this exhibition hopes to give it the prominence it should deserve.

In conjunction with the exhibition, our guest curator, Tan Yong Jun, will be giving an art talk on 26th August 2017, 3-4 pm. It will provide a narrative of Lim Tze Peng’s aesthetic change, including the detailing of the interplay of intrinsic and extrinsic motivators. This is a free-admission event but registration is required.