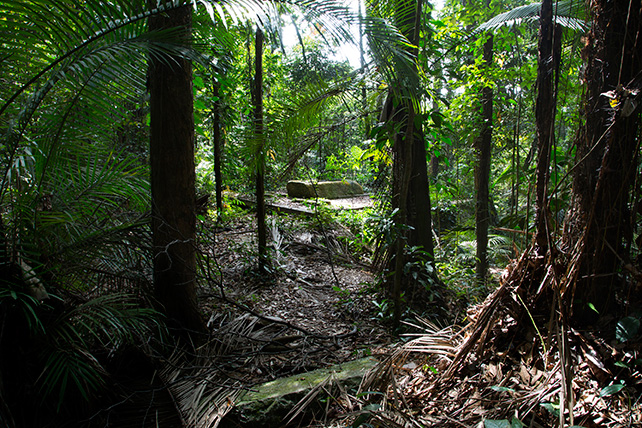 This exhibition starts with two images that were found while searching through
London’s Imperial War Museum online archive: the search term used was ‘Japanese occupation of Singapore, World War Two’. One of the images is relatively well known – Japanese military executing Sikh prisoners-of-war – while the other image is perhaps not – British military executing Indian revolutionaries. Although both images speak of imperial colonial conquests, their accompanying museum archive narratives build quite different historical pictures. The image of the Japanese is from one of four ‘atrocity photographs’ that were found by the British when they reclaimed their Singapore colony; it says that they “clearly show the inhuman brutality practised by the Japanese upon their helpless prisoners”. In markedly different language, the image of the British simply states “execution of the mutineers”.

It’s the violence, stemming from two profound acts of empire building, that’s infused within both these images that this exhibition explores by bringing together present-day photographs of memorials linked to the ‘Battle of Singapore’ and the Indian National Army with archival material. The aim here is not to compare the ‘evilness’ of one empire over another, but rather to question which versions of history become agreed upon, and by who. Accordingly, this montaging, across time and space, of essentially disparate materials, disrupts not only the sanctioned historical and ethical discourses embedded within these memorials sites but also the role of imaging and documentation within such contexts. This exhibition questions how images may provoke counter experiences of historicised narratives that both pay homage to the traumas and suffering of, in this case, imperial warfare, while also unsticking these histories that have become preserved through memorial. Imperial Double-take asks its viewers to do just that, to look again, and in doing so to seek out “what’s living and breathing in the place hidden from view: people, places, histories, knowledge, memories, ways of life, ideas”.

Imperial Double-take is a result of Fiona’s 6-week residency in Jan to Feb 2015 with Objectifs. The Objectifs Residency & Lab is supported by the National Arts Council.