In Other Words – Solo Exhibition by June Lee Yu Juan 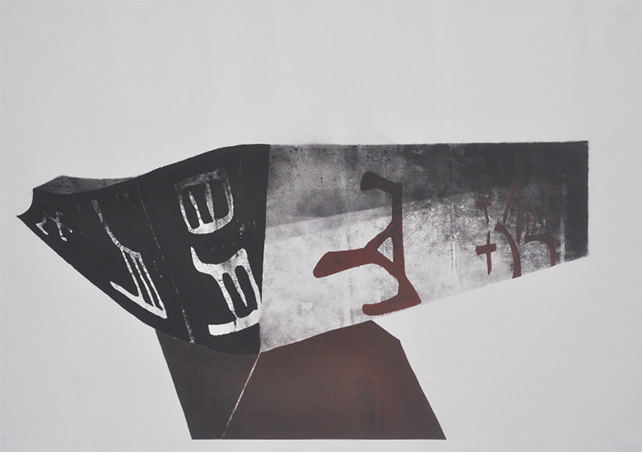 Since her first exhibition in 2008, June Lee Yu Juan has been questioning her Chinese roots through the prism of Chinese painting and calligraphy. Her fascination for shapes, forms and structures has dictated her to re-interpret Chinese characters in a formalistic approach. By folding, twisting and warping texts into volumetric masses she creates solidified assemblages, which suggest various cultures and influences and refer to the combination of diverse Chinese cultures from the past and the present.

In Other Words, her last series, pushes the boundaries of her practice even further in challenging the viewer by transgressing the usual rules of calligraphy. The texts, which are of high importance in calligraphy, are put to the side and partially hidden. In besides this what matters Lee Yu Juan introduces the red colour, which traditionnaly is not used by calligraphers. Flat surfaces with non diluted ink disrupt the visual aesthetic of calligraphy, while simplified characters which could be easily read by the young generations are partially hidden.

Inspired by slabs and seals this series conveys the idea of the weight of history and the struggle in connecting to the past. The folded surface in “or rather, rather than”, the first
artwork of this new series, suggests both the opening of a new chapter and the attempt of the artist to peel off layers to reveal an old and forgotten knowledge. More dramatically, in “could, couldn’t it” , the volume with a yellow section looks like a fallen and broken object, which cannot be blended anymore.

Like in her previous series, Lee Yu Juan adresses the meaning and meaninglessness within language and uses images and text to subvert the status quo of Chinese ink practices.

The seven new artworks of this series have in common a stunning three dimensional
effect, which has become Lee Yu Juan’s hallmark.