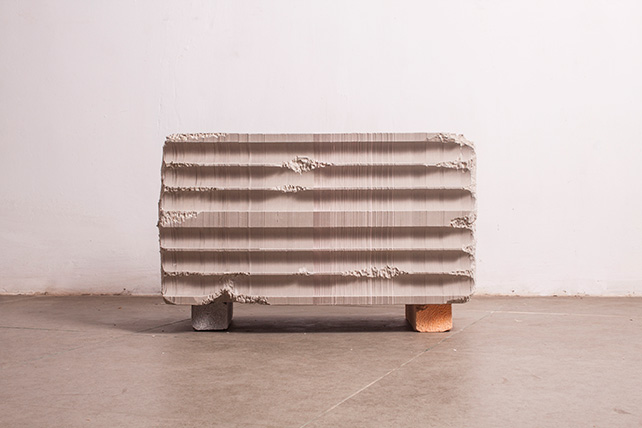 Constructed …scape is a solo presentation of new works by Indonesian artist Irfan Hendrian that reminisces the landscapes of Bandung – his hometown – as experienced in childhood and considers how the sustained exploitation and transformation of the city has rendered this image all but a distant memory. Hendrian was reacquainted with the city 10 years ago. Long gone was the idyllic scenery of lush green hills and pastoral countryside: Bandung was now a bustling metropolis; unreservedly recast by rapid economic growth and the social change that followed. The gulf between the idealised and the real widens with further urban development, yet the line between the two notions blurs alongside Hendrian’s memory, creating an ambiguous expanse.

The works in Constructed …scape are built by piling up paper, which acts as Hendrian’s medium of recollecting, recording and reconstructing the scenery of his hometown. Hendrian’s process – labour-intensive and involving industrial equipment – serves an unmissable ironic statement and highlights the arduous task of recovering long-lost memories.