The allure of Korean culture has led to a global surge in popularity of all things Korean. But what do you know of its genesis? A showcase of Korean treasures and artefacts will travel to Southeast Asia for the first time, inviting you to traverse history and uncover the origins of what you know and love about Korea today.

Joseon Korea: Court Treasures and City Life is an intimate inspection of 500 years of Korea’s last dynasty, the Joseon (1392 – 1897) – a period that inimitably shaped modern Korea. Presented by the Asian Civilisations Museum (ACM) in Singapore, this exquisite showcase has been three years in the making, in collaboration with Korea’s most renowned national museums, and is ACM’s largest to date. In the spotlight are more than 150 artefacts and treasures from the National Museum of Korea and National Palace Museum of Korea that depict various facets of a vibrant Joseon era – from its royal and religious patronage, life in the courts of power, to the everyday lives of the people. 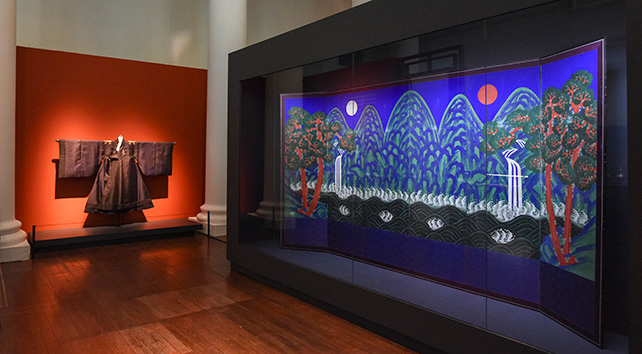 A replica of a king’s ceremonial robe (L) and a six-panel screen of Sun, Moon and Five Peaks (R) featured at the Joseon Korea: Court Treasures and City Life exhibition. Image courtesy of Asian Civilisations Museum.

The exhibition guides visitors through an immersive narrative of Joseon’s rich cultural and artistic legacy across six sections:

–       Departing from the Goryeo kingdom sets the stage with an introduction of the transition between two dynasties, including key episodes and figures like King Taejo of Joseon, whose changes and ideas laid the foundation for the dynasty. His move to adopt Neo-Confucianism distinguished a new era for Korea, and shaped its political and cultural life;

–       Royal authority and court culture unveils life inside the royal palace, the roles and expectations of the king and queen, courtly rituals and ceremonies, and even costumes, food and music. The calculated pomp and pageantry that surrounded them was central to asserting the royal authority, and the King’s multiple roles as leader, ruler and scholar;

–       The yangban, which looks at the elite and aristocratic class in Joseon. Considered the moral pillar of Joseon society, their adherence to Confucian ideals and hierarchical values translated to their daily lives and in their living spaces. This examination of the yangban’s public and private lives paints a picture of their prominence, priorities and pursuits;

–       Nature in Korean Art depicts the importance of nature to Joseon artists – not just as inspiration, but also the material for their creations. Among the showcase are traditional buncheong stoneware, popular during the first two centuries of the Joseon dynasty, and the characteristically Korean style of ‘true-view’ landscape paintings that reflect the socio-political climate of developing a distinct Korean identity;

–       Sacred art and religious traditions provides insight to the influence of Confucianism and Buddhism in Joseon ritual life – from grand state ceremonies to private family religious practices. Beyond the connections of the living to their forefathers and enhanced solidarity among kin through such traditions, how Buddhism integrated with indigenous folk religion for mass reception is also examined; and

–       Streets of Hanyang: Everyday life of the people, depicting life in the capital through genre paintings – a major form of Korean art that flourished in the 18th century. These vignettes candidly capture everyday life, societal classes, and how important occasions like the first day of the Lunar New Year, harvest festival Chuseok and individual rites of passage were celebrated.

Joseon Korea: Court Treasures and City Life concludes with an invitation to step into a contemporary interpretation of traditional Korean cultural motifs, by award-winning artist Ran Hwang. Becoming Again; Coming Together is her largest single mixed-media installation to date. The five-part installation at ACM’s Learning Gallery features three newly-commissioned site-specific works, and includes an elaborate seven-metre-wide pins-and-thread mural of a pair of phoenixes, as well as a 21-plexiglass panel video installation accompanied by traditional music performed with Joseon-era instruments. 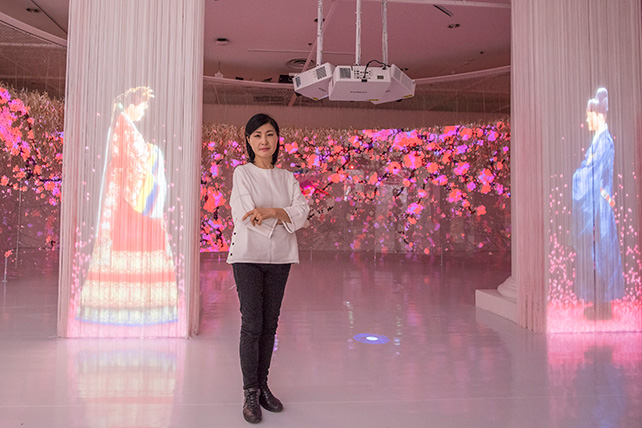 Admission: $10 for Singaporeans and PRs (free for children and seniors) and $15 for tourists ($10 concession, $45 for a family of 5), including entry to permanent galleries. Free Admission to Becoming Again; Coming Together for all visitors