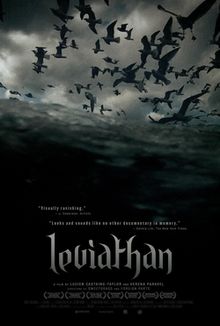 Filmed off the coast of New Bedford, Massachusetts – at one time the whaling capital of the world as well as Melville’s inspiration for Moby Dick; it is today the country’s largest fishing port with over 500 ships sailing from its harbor every month.

Leviathan follows one such vessel, a hulking groundfish trawler, into the surrounding murky black waters on a weeks-long fishing expedition. But instead of romanticizing the labor or partaking in the longstanding tradition of turning fisherfolk into images, filmmakers Lucien Castaing-Taylor ( Sweetgrass ) and Véréna Paravel ( Foreign Parts ) present a vivid, almost-kaleidoscopic representation of the work, the sea, the machinery and the players, both human and marine.