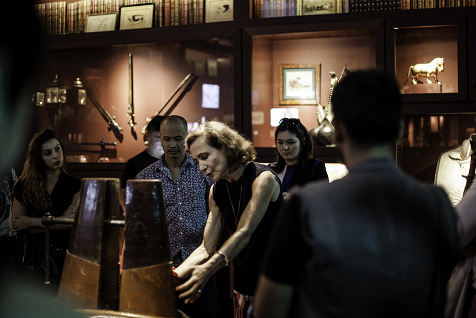 For the very first time, visitors will have the chance to step into the secret enchanting world of the Emile Hermès museum from Paris, bringing a little piece of the heart of Hermès to Singapore in honour of our golden jubilee.

Well before he took up the reins of the house in 1920, Émile Hermès began gathering ingenious and beautiful objects, keeping these in his office at 24, Faubourg Saint-Honoré. His first purchase: a parasol-walking stick bought at the tender age of 12 with his first salary of two francs. He did not know it then, but it was the start of a private collection which has continued ever since, through the three generations of Hermès family members that have succeeded him.

When Hermès imagined this Little Room of Wanders, it was based on a sort of container parcel delivered off the boat from Paris – a flaneur’s edit of the house’s years of accumulating beautiful, captivating things. It seemed to make perfect sense, therefore, that this container of treasures might ﬁnd itself at the Asian Civilisations Museum lawn by the mouth of the Singapore River, where travellers from ages past first arrived in Singapore.
Travelling through this miniature world, sometimes at a canter, sometimes at a gallop, one takes a journey across bygone eras and distant regions.

Discover the collar last originating from the saddle and harness workshop of Hermes founder Thierry Hermès. Since 1837, six generations have handed down the founder’s tool, the rootstock of a lineage raised with his artisan values.

Curious about how the horse and carriage logo of Hermès came about? Here’s a chance to view the 19th century lithograph by French painter Alfred de Dreux which usually occupies the place of honour above the fireplace in the Hermès museum.

Why did Rochefort remark that “Hermès has given her majesty the lash!”? Do not miss the dramatic parasol whip created by Charles-Emile Hermes for Empress Eugenie.

This is a unique opportunity for visitors to discover over a hundred treasures such as paintings, equestrian objects, ingenious mechanisms, rare books and unusual knick-knacks that have become a permanent source of inspiration for the house’s designers.