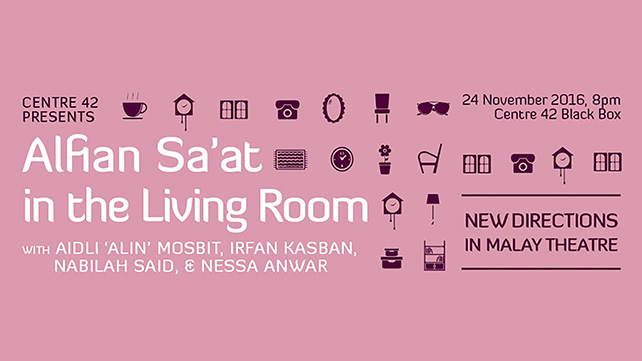 Over the past decade, a new crop of Malay playwrights has emerged, making their mark on Malay Theatre. Works from these theatremakers raise interesting questions about the state of Malay Theatre in Singapore.

Is Malay Theatre defined purely by language? What are the politics and aesthetics of Malay Theatre? Is it situated at a margin to mainstream English Theatre, and how does this marginality shape production? Given the widespread use of surtitling, are those works still primarily written to address a Malay audience? And are there certain taboos that exist because of religious sensitivities and ‘community standards’?

Join Alfian Sa’at and fellow Malay playwrights Aidli ‘Alin’ Mosbit, Irfan Kasban, Nabilah Said, and Nessa Anwar in our Living Room as they explore the issues they grapple with in their works.

Alfian is well-known for frank, insightful, and provocative literary and dramatic works, written in English and Malay. As the Resident Playwright of W!ld Rice, he has written acclaimed plays such as the Asian Boys trilogy (2000, 2004, 2007), Cooling-Off Day (2011), and the historical epic Hotel (2015, co-writer). Alfian is also an author with published collections of short stories and poems such as Corridor (1999) and The Invisible Manuscript (2012). He is a four-time winner of Best Original Script at the annual M1-The Straits Times Life Theatre Awards and a 2001 recipient of the National Arts Council’s Young Artist Award for Literature.

This Living Room is conducted in Malay and English.