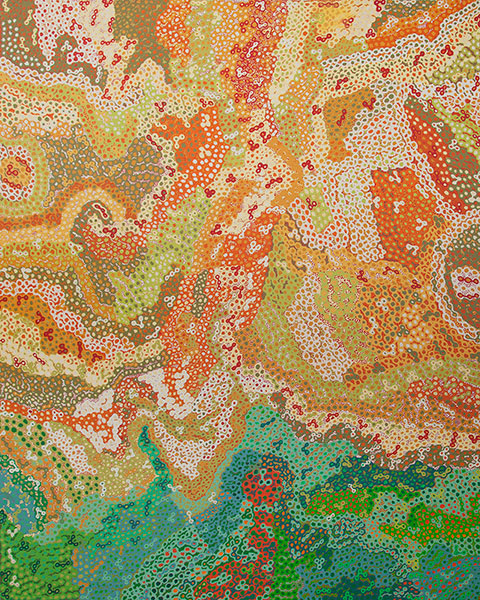 ReDot Fine Art Gallery is honoured and excited to be able to release a stunning new body of works from the heart of the Modern Contemporary Indigenous Art movement. Tjungu Palya is an artist-run art centre, in the Anangu Pitjantjatjara Yankunytjatjara (APY) Lands in the far north west of South Australia and we will be re-opening our doors at our new site in the Old Hill Street Police Station with this stunning collection.

With many of their artists being ‘first contact’ bush people, they retain strong cultural knowledge and a willingness to share what is appropriate to people of other cultures. Promoting traditional arts practices while also encouraging new forms of artistic expression in the re-telling of the Tjukurpa (‘Dreaming’ – Law), the stories virtually leap off each canvas, begging the viewer to look more deeply for meaning and consequence.

We will be hosting the first solo collaboration for three of their most collectable and exciting artists, in a show simply titled, Mangkurpa (3). Maureen Baker, Beryl Jimmy and Tjampawa Stevens will for the first time come together to explore their sacred stories in their own very unique yet complimentary styles.

As children, these now senior Tjungu Palya artists lived a traditional nomadic life travelling in small family groups. Their traditional lifestyle continued until the 1930s, when desert people were migrated to Ernabella and Warburton missions, initially as a result of the assimilation policy of the day but also due to terrible drought and the atomic testing at Maralinga.

The desire to return to their own country remained critical to the community elders throughout this time, and by the 1960s families began returning to their lands and establishing small remote settlements. In spite of the interruption, the extreme remoteness of this area and the continued connection to the land has contributed to the maintenance of an Indigenous lifestyle rich in ceremonies and traditional observances.

Tjungu Palya artists have powerful spiritual links to their country, and produce paintings that are exuberant and have highly individual compositions depicting their myth cycles embedded in the topography of the land. Join us to be mesmerised by this latest journey through the Australian outback as we look at works by highly collectable master of the Modern Indigenous Art movement. Artists who are carrying the torch of this art movement forward with vigor and positive expectations despite the challenging times that lie ahead for these nomadic, cultural warriors!

The exhibition begins on Wednesday, 17th June and runs until Saturday, 1st August 2015 by appointment only. It is a must-see for anyone interested in following the recent developments of Indigenous art in Australia. 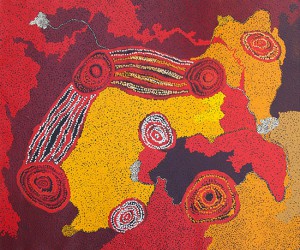 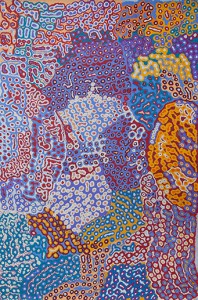