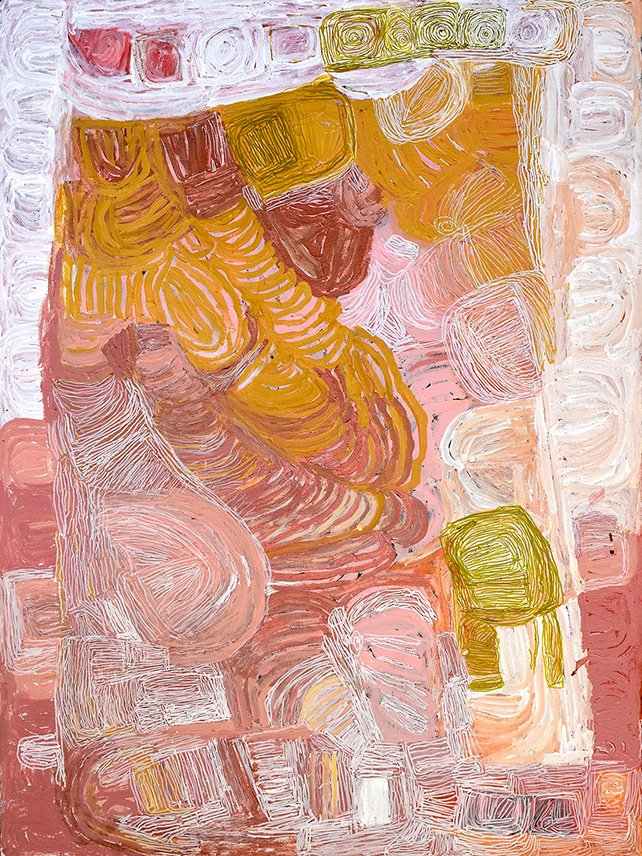 Martuwarra (Revisited) is a celebration of Sonia Kurarra’s painting repertoire, with works on three different mediums across almost the entirety of her painting career.

With more than 40 works within the catalogue, it also boasts the accolade of being the largest ever collection of work to be offered to the collecting community. I hope you enjoy this painstakingly curated body of work, which has taken forever to pull together and feels mature enough to finally bring to the art world.

When Sonia first exploded onto the Australian art scene, her work was characterised as “Mighty swirls of wild colour” by the then Mangkaja Arts Co-ordinator, Katie McGuire, and it would have been better known sooner she added, “if the artist hadn’t been inclined to ‘go walkabout” all the time!

Sonia was born by a billlabong at Noonkanbah community, on a Kimberley cattle station 50/60 years ago. Her parents were Walmajarri whose movements led them to live by the Fitzroy River.

She lived on bush foods rather than Western tucker – so fish, turtles and bush bananas were vital to her survival, and are “etched into her psyche”, coming out on her canvases recanted Ms. McGuire. “She’s a fabulous sculptor in paint, building layer upon layer – with no idea of planning her art. It’s all expressionistic compulsion, with a deep bush knowledge”.

A compulsive artist, Sonia for a long time was a teacher’s aide at the local school where she facilitated art making with the children before finding her true calling and focusing her time on her own artistic practice for over 25 years now.

Initially she exhibited as part of the cooperative, finding her place alongside other heavy weights of this important community art centre, such as Cory Surprise, Stumpy Brown and Paji Honeychild, to name but a few. But, as her talents started to be recognised, she soon commanded the stage on her own, and her first solo show was not long in being realised, in 2009 in Sydney.