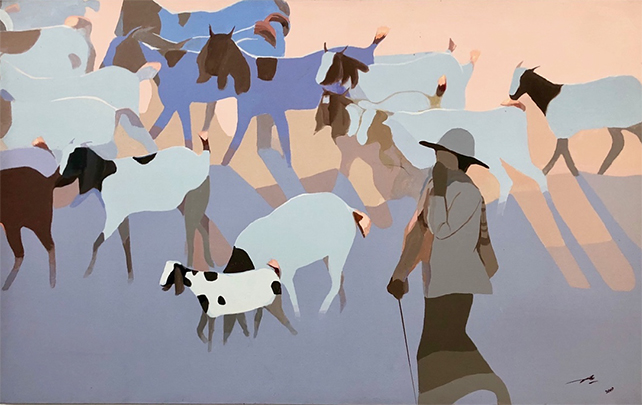 Maung Aw is considered “the master who sells color” by Myanmar artists, because of his paintings, which display colors that are unique to Maung Aw.

In his early work, he created mostly still-life paintings. From 1987 to 2000 he deviated from the accepted forms of realism, as promoted in the academic approach, and stepped into one uniquely his own, described as “a simple way, minimizing colors and shapes.” He has kept on his trajectory of capturing light, along with his eagerness to place colors on canvas, while changing the style of drawing. In those years, he captured light with his brush and painted a series of landscapes of Myanmar onto his canvas.

In 2007, he again simplified his use of colors by extracting colors from nature, while keeping them as simple as possible. “The simplest way is the most effective,” said Maung Aung, displaying his “Turban Kid”, a painting of a series in which he introduced the beauty found in ordinary children.

In 2012 he brought about another revolution when he combined three to four landscapes to create just one, describing this, in his own words, as “simplification”. This simplification satisfied him, allowing him to create his best paintings, but he had to change his method of painting.

In 2014 he created a series of paintings, entitled, “In the Dressing Room”. These paintings displayed abstract designs, but were without local color, and they caught the attention of local and international art collectors, who eagerly sought out his paintings at exhibitions, both abroad and at home.

It was in 2016 and 2017 that Maung Aw brought decorative motifs found in Asian countries to his abstract paintings, declaring his new creation as the “Decorative Way”. He developed this technique when he discovered floral designs and patterns, mostly found in the backdrop of Burmese thrones and temples in Bagan. While he tried adopting floral designs and motifs in his abstract paintings, he did not copy the same designs he had seen. Instead, he created his own motifs to attract viewers. “I have been working on decorated arts for more than one year, and I am waiting to see my new creation,” he said.

Opening Hours: Mondays to Friday 11am – 7pm,
Saturday by Appointment only, Closed Sundays and public holidays.