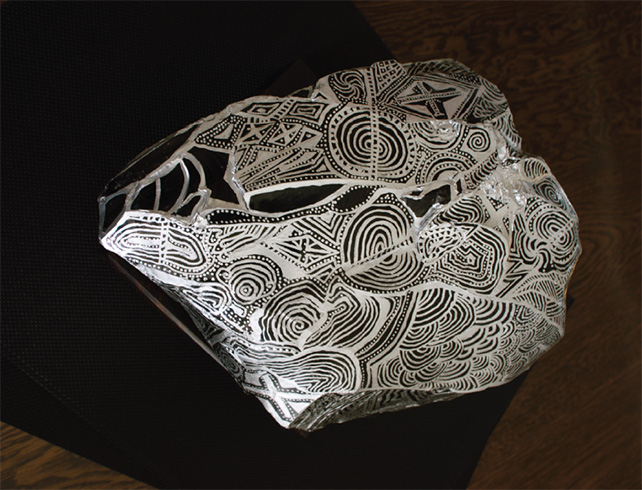 Drawings on a obsidian stone, 2015

From an artistic family and as a result of growing up in many different geographical areas, Middle East, United States and Europe, and being of Armenian descent, Sharis Garabedian absorbed the multiple influences that play a major role in her art. 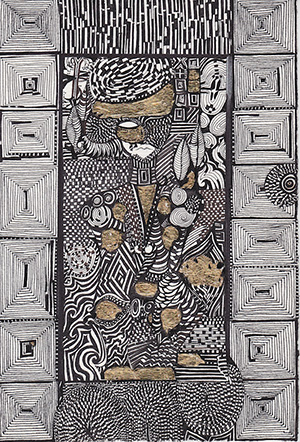 The exhibition Meditative Imprint encompasses 34 drawings and 4 obsidian stones. The artist’s medium, Chinese ink on paper with gold and silver brush, is inspired by the technique used in ancient Armenian miniatures and manuscripts. Although created spontaneously the drawings contain a strong narrative rooted in the artist’s identity.

Titles such as Garni Dzor, From Sevan to Van, Nakhichevan Before the Destruction of Khatchkars refer to the artist’s recollection of events and places belonging to the Armenians’ collective memory. They invite us to embark in a journey through space and time, to Armenia where the mythical Garden of Eden was located.

Sharis’ work is in the collection of Yerevan Modern Art Museum and the National Gallery of Armenia. She has many private collectors around the world. Sharis Garabedian lives and works in Paris, France.

“A Meditative Imprint is an impression of my heritage into my memory and self image expressed in my drawings. It is a stamp on my mind of my past and what I have received into my unconscious being. It is an image that cannot be erased, thus, it is who I am, where I am from, what I have experienced, witnessed, and been affected by past and present.” ~ Sharis Garabedian