Viewing the paintings of Si Jae Byun gives one the feeling of peering through a looking glass at wondrous worlds caught in the act of self-creation. Influenced by subjects as divergent as construction sites and chromosomes, her overriding interest is in the coexisting realities these objects can suggest; inside and outside; physical space and psychological space; the natural world and the manmade.

In the Time and Distance series these ideas manifest in lyrical swirls of colour and motion. In Moon #2 there is a geometric precision to Byun’s use of line, yet the subjects seem inherently organic and aquatic in nature. As the name implies this piece represents one phase of lunar cycle. Its counterpart painting, Multifarious #1, alludes to a human egg intuitively responding to the pull from above, each entity independent, yet interconnected. 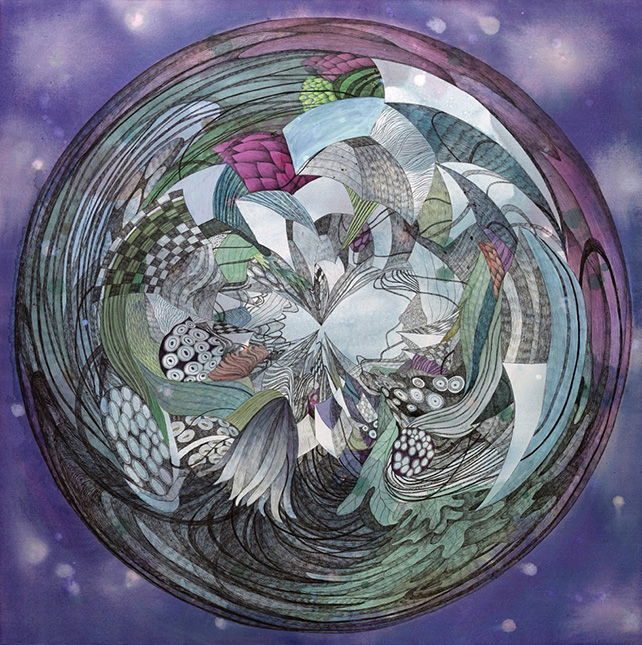 Byun’s arts education included not only painting, but also textile design, new media and set design. This multi-faceted arts training helps her to negotiate ideas between multiple media and injects a certain amount of fluidity across her projects. It is also directly responsible for her current canvas of choice—silk. Using 2 to 3 paper-thin sheets of silk as her base she draws and paints on each layer, essentially building each painting. This unusual process allows her to employ the space between the layers as part of the work, the unique structure incorporating an element of distance within the painting itself.