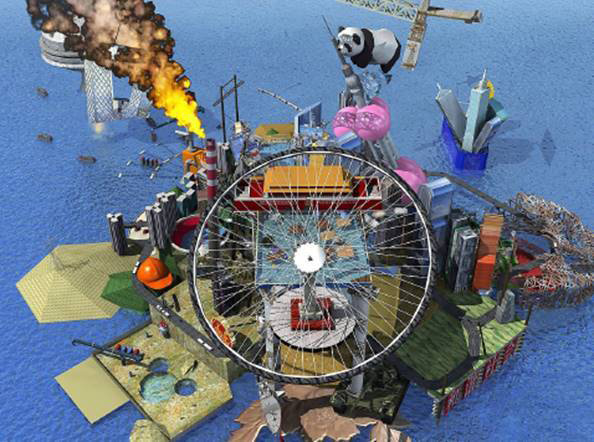 To be launched during the Singapore Art Week, Cao Fei, one of China’s foremost contemporary artists, will present a new large-scale kinetic sculptural installation, 浮槎 Fú Chá, at National Gallery Singapore, as part of the Ng Teng Fong Roof Garden Commission. This marks an exciting departure for the artist who is primarily known for her moving image practice. Some of her known works include RMB City: A Second Life City Planning (2007) that reimagines the future of China’s cities in online virtual world Second Life, and Asia One (2018) that examines technology’s effect on human relations. The artwork at National Gallery Singapore will also be the first of a set of solo presentations by Cao in the new year before her exhibitions at the Serpentine Gallery, London and UCCA Beijing.

The title, 浮槎 Fú Chá, alludes to a fable about a raft that traverses the milky way and the sea. With a distinct artistic language that straddles reality and fantasy, Cao will present the first kinetic artwork shown at the rooftop garden. 浮槎 Fú Chá draws reference from the region’s history of migration, Singapore’s identity as a port city shaped by numerous diasporic communities, the fengshui of the rooftop garden, and the landmarks of the civic district that surround the Gallery.

Known for her social commentary on the rapid and chaotic changes occurring in Chinese and Asian societies today, Cao has had solo exhibitions at Centre Pompidou Paris (2019), Tai Kwun Contemporary, Hong Kong (2018) and MOMA PS1, New York (2016), among other notable venues. The internationally renowned artist roots her projects in historical research, as well as art and film histories. At the same time, she embraces mass cultures like cosplay, games, popular music and social media to reflect on the human condition, and the realities of global flows in contemporary post-capitalist societies.

This is the fourth in the Ng Teng Fong Roof Garden Commission series, which partners renowned artists who respond to and extend dialogue on and around the history of Southeast Asian art.